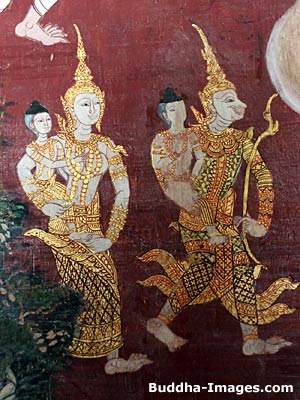 Scene from the Vessantara Jataka. This seems to be a very popular Jataka in Thailand. It depicts the life of prince Vessantara who gives away all his possessions, including his children to become servants of an evil spirited character. In the end everything turns out right though. This Jataka displays the virtue of Charity.
In the picture the prince and his wife take their children out of the palace to life in the forest.
Wat Kongkaram, Ratchaburi

The time had come for Phusati, Sakka's principal consort, to leave Tavatimsa heaven. On descending to earth, she became the mother of the Bodhisatta in his next-to-last birth. In her rebirth in the world of men she was still called Phusati and grew into a most beautiful young girl. At the age of sixteen she was wed to Sanjaya, king of Sivi, and they loved each other dearly. When she became aware that she was carrying a child, she had six alms halls built, from which she distributed silver daily. As the birth of her child grew imminent, she expressed the wish to visit every part of her husband's capital city. The king granted her request and had a lying-in shelter made ready to follow her. On approaching the Vessa, or merchant sector, her labor began. Behind the shelter she gave birth to a son. Having taken his first breath of air from the commercial quarter, the newborn child was named Vessantara, though he possessed none of the avarice of a merchant. For at that time a miracle occurred : the baby spoke to say, "Mother, what gift can I make?" causing the gods in heaven to take notice of this Great Being.

When he was eight years old, the boy expressed the desire to be able to give away something of his very own, something that had not been given him by another. He said, "If someone should ask me for my heart, I would give it to him, or my eye, or my flesh." This unusual wish attracted the attention of the gods, so that the earth quaked and thunder rumbled in the clouds over the Himavat. As a youth, Vessantara contented himself with giving away readily and frequently the things he had acquired. At sixteen, his formal studies completed, the kingdom was given over to him and a marriage arranged between the king-to-be and Princess Maddi, daughter of a neighboring king. 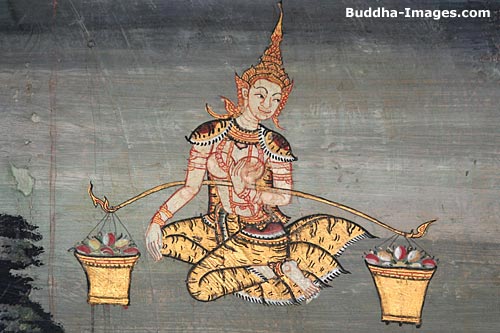 Maddi, Vessantara's wife, collects food in the forest (see below).

The kingdom prospered, and their marriage was happy. A son, Jali, and a daughter, Kanhajina, were born to them. Years before, when Vessantara was a baby, a young white elephant had been brought to the royal stables. The two princely beings grew up together. It was on this white elephant that Vessantara visited his mother's alms halls six times a month to distribute gold. Indeed, many of his subjects attributed the prosperity of the kingdom and the benign rains that watered the fields to the virtue of the white elephant.

At this time the nearby kingdom of Kalinga was suffering from a prolonged drought. All the prayers of its people, all the supplications and offerings of its king were to no avail. Many in the kingdom had heard of the great white elephant and of Vessantara's generosity. They suggested that the king send eight Brahmin emissaries to ask Vessantara for the favored creature. The king agreed. When the Brahmins arrived at Sivi, King Vessantara was distributing alms from the elephant. The valuable beast was covered with precious gems and other trappings of great worth. But on hearing their request, the king granted it immediately, pouring water into their hands to indicate the gift, so great was his desire to be charitable. When the gods saw this noble act, the earth shook and the skies were filled with thunder and lightning. 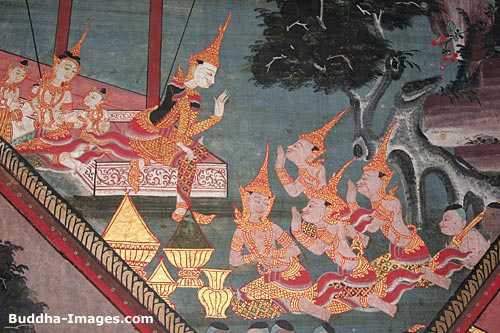 Vessantara, Maddi and their children, with attendants at the palace. [probable]

The citizens of Vessantara's kingdom were so distressed by the loss of the great animal that had brought them prosperity that they forced King Sanjaya to resume control of the kingdom and banish Vessantara. His parents were heartbroken, but the people's fury was so great that he was granted only one day's grace before exile. On that day Vessantara gave away all his possessions, seven hundred of each kind : elephants, horses, chariots, maidens, slaves, and many others. This was known as the Gift of the Seven Hundreds. People came from far away, each to receive a gift. Vessantara was still distributing them when night fell. Then, with his wife and children, who would not be left behind, he spent his last night taking leave of his parents. The banished family left the city at sunrise in a chariot drawn by four horses. No sooner had the city gates closed behind them than they met four Brahmins. Having arrived too late for the Gift of the Seven Hundreds, the Brahmins now asked for the four horses, which were promptly granted them. The gods dispatched four deities in the form of stags to draw the chariot.