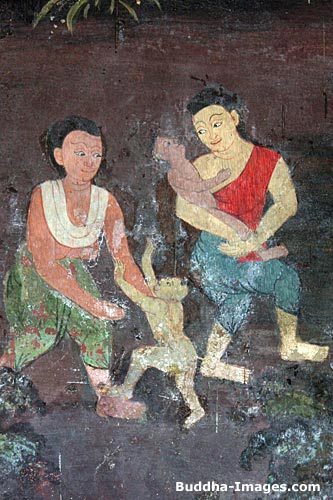 Scene from the Bhuridatta Jataka.

In the hidden depths of the earth, far below the fields and woodlands of the world of men, dwell the nagas. They are magical serpents who can assume human form when they wish. Their kingdom glitters with rare jewels and precious minerals as they live in great splendor and richness.

From time to time, they leave their realm and mingle with the human beings who inhabit the surface of the earth. The archenemy of the naga is the garuda, the great bird who lives in the sunlit and airy skies.

Once when a garuda was hungry he captured a naga and flew off with him. As he swept over the Himavat forest, clutching the head of the great snake in his claws, the naga was able to coil himself around a tall banyan tree. But the strength of the garuda was such that the tree was torn from its roots as he flew on. After he had devoured the naga, the garuda remembered that the banyan tree had sheltered the hut of a hermit, and he feared that his unwitting deed might bring misfortune upon himself. He returned to the hermit's hut to ask him and was assured that he would suffer no ill on this account, for his action was not intended to harm. Pleased by this answer, the garuda rewarded the hermit by telling him the words of a magic snake charm of great power and gave him a fan behind which to chant it. 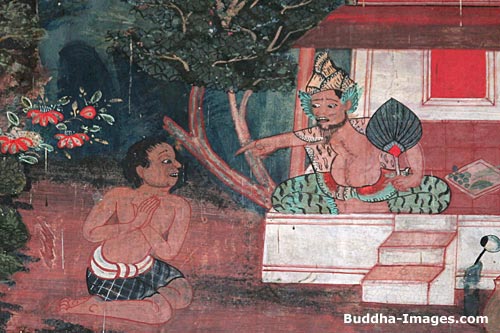 The Hermit, who has received a magic snake charm, and a fan behind which to chant it, has no reason to use the charm, and is about to give the powers to his servant Alambayana.

But as the hermit had no reason to use the charm, he gave it away to a Brahmin snake charmer named Alambayana who had been his faithful servant. Alambayana decided to use the charm to capture a mighty naga, which would earn him fame and wealth. He left the service of the hermit and wandered through the forest until he reached the banks of the Yamuna River. There he encountered a band of naga youths who had with them the precious jewel of the nagas, the "jewel that grants all desires." As soon as they heard the Brahmin muttering the magic spell of the garuda, they trembled with fear and sank into the water, leaving the glittering gem behind. Alambayana, delighted with his good fortune, picked up the jewel, though unaware of its magic powers, and continued into the forest.

A little later, he met a hunter and his son who earned their livelihood by capturing wild animals in the forest. When the hunter spied the jewel in the hand of Alambayana, he recognized it and was filled with greed and regret, for once before he had had the opportunity to possess the gem but had not taken it. He thought back to that time many years before and recalled how he had heard the music and laughter of naga maidens at dawn one morning after he had spent a night in the forest. When he had crept close to discover the cause of the merriment, the maidens had spied him and fled, leaving behind a princely snake dressed in rich attire and coiled about a huge abandoned anthill. When the woodsman had approached him and asked who he might be, the prince had told him that he ,was Bhuridatta, prince of the nagas. He had earned the name Bhuridatta, or godly Datta, because of his wisdom and goodness. He had determined to increase his store of merit by leaving his wives and palace to live as an ascetic. He had found this abandoned anthill in the world of men, and every night he coiled his great length around it and remained there motionless until morning, vowing, "Let him who will take my skin or muscles or bones or blood." At dawn, he had explained, ten naga maiden attendants would come to escort him back to the realm of the nagas.

Bhuridatta did not want anyone to know about his place of meditation. To keep the woodsman from revealing it, he had invited him and his son to return with him to the naga kingdom and dwell in splendor there. They had accepted and in the realm of the nagas had lived in great ease and luxury. However, after a year of such a life, the hunter had become restless and longed to return to the world of men. Bhuridatta, anxious for him to stay, had offered him great riches, even to the very same "jewel that grants all desires," but the woodsman had refused them, saying that he wished to become an ascetic like Bhuridatta. Thus he and his son had returned to their former dwelling. When his wife learned, however, that he had decided to become a hermit and leave her again, she angrily told him that he must stay and help her support their family. So he had resumed his former life, a humble hunter as before.

The Bhuridatta Jataka -
Onlookers at the Scene of the Naga Prince performing (read further). In the middle below, a probable foreigner is depicted.

Now when he saw the magic jewel in the hand of the Brahmin Alambayana, he regretted not having accepted it when Bhuridatta had offered it to him and determined to have it. First he tried to persuade Alambayana that the gem was dangerous, but the wily Brahmin could not be convinced to part with it. Then Alambayana spoke of the purpose of his wanderings : to find and capture a mighty naga, which would win him fame and fortune. To anyone who could inform him of the whereabouts of such a snake he would give the glittering gem, whose powers he still did not realize.

The hunter saw in a flash how he could regain the wealth he had once given up. When he was about to tell Alambayana where the naga prince was hidden, his son tried to dissuade him from betraying his friend, who had trusted him to keep his secret and who had welcomed the hunter to his palace for a year. He urged his father to ask the naga prince himself for whatever riches he wanted, for he was certain that the naga would grant them.

But the greedy woodsman would not listen to his son's wise counsel and led Alambayana through the forest to the great anthill around which Bhuridatta was coiled. Anxious to capture the great serpent, Alambayana hastily handed the hunter his reward, the magic jewel. But as the hunter grabbed it eagerly, it slipped through his fingers and disappeared through a crack in the earth, to be reclaimed by the naga world whence it came. The foolish woodsman departed, lamenting his misfortune.

Alambayana, intent upon his evil deed, approached Bhuridatta, chanting the magic spell and waving the fan, and captured him with ease. The Bodhisatta, for such was Bhuridatta, submitted, obeying the precept he had set for himself: "Let him who will take my skin or muscles or bones or blood." Alambayana then crushed his bones and forced him into a basket. Although the naga prince suffered great pain, he permitted himself to feel no anger toward the Brahmin.

Alambayana took his prisoner to a nearby village and ordered him to perform. Unaffected by his cruel treatment, the great snake danced, assuming various colors and forms, spitting forth water and smoke, and causing great wonder among the villagers. The Brahmin profited greatly from Bhuridatta's astonishing talents, for the people gave him much money to see the snake perform. He went from village to village, amassing great wealth and renown, until at last he reached Benares.

Meanwhile, the wives and mother of Bhuridatta had missed him and sent his brothers to seek him. One brother went to search in the kingdom of the gods, one looked in the Himavat forest, and the eldest, Sudassana, searched in the world of men. Dressed as an ascetic, he was accompanied by Bhuridatta's favorite sister, who had disguised herself as a frog hidden in Sudassana's matted hair. 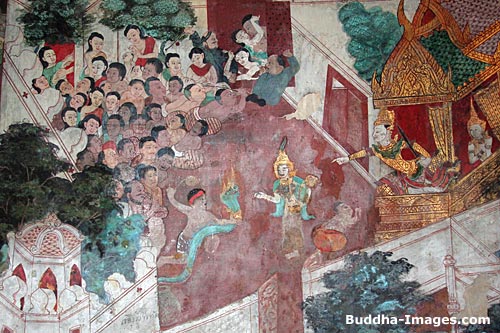 The Bhuridatta Jataka -
Alambayana makes the Naga Prince perform before the King of Benares.

See enlarged version of this image.

He searched the world of men in vain until finally he came to the city of Benares, where his mother's brother was now king. He arrived just as the people were gathering in the marketplace to watch the great snake perform. Bhuridatta lifted his head out of his basket and saw his brother in the crowd. He went to him, and placing his head on his brother's foot, he wept, and Sudassana wept also. Alambayana, seeing this from a distance, wondered if the snake had bitten the ascetic and assured Sudassana that his snake was not poisonous.

Sudassana answered proudly that no venom from a snake or any other creature could harm him. This retort made Alambayana angry and he challenged Sudassana to show his powers. The ascetic called forth his sister, who, in her form as a frog, contained a most poisonous venom. He asked her to spit three drops of her poison into his hand. Then he threatened Alambayana with these words: "Who sees these drops of poison waiting in my palm? Once they touch the ground, they have the power to blow up all of this city of Benares. Shall I show you?"

Alambayana shrank back, and the people cried out in fear. Only the king remained calm. He asked, "How can this poison be destroyed?" 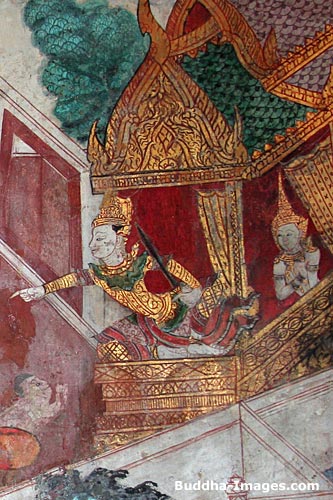 Sudassana told him that the only way was to dig three enormous pits and to fill one with drugs, one with cow dung, and one with medicine. When this was done, he threw the three drops of poison into the three holes. They immediately exploded, filling the air with heat and thunder. The terrified Alambayana became as white as a leper, and he said three times, "I will set the naga prince free."

Whereupon Bhuridatta emerged from the jeweled basket and, assuming a radiant form, stood before the multitude in all his glory. The evil Brahmin crept away and was not seen again. The two brothers revealed themselves to the king as his nephews, and there was a great celebration before they returned to the naga kingdom.

At the end of his life, Bhuridatta, having succeeded in keeping the precepts, ascended to heaven with the hosts of virtuous nagas.