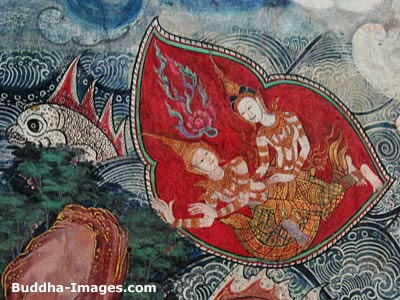 Prince Mahajanaka suffers a shipwreck. He struggles to keep alive swimming the ocean for 7 days untill the Gods came to rescue him. The scene symbolizes the virtue of Perseverance.
Wat Kongkaram, Ratchaburi

There was a king, Mahajanaka, of Mithila in the kingdom of Videha. He had two sons, Aritthajanaka and Polajanaka. When the old king died, the elder brother, Aritthajanaka, became king, and the younger brother his viceroy. In time the new king became suspicious of his brother's popularity with the people and, fearful for his throne, had Polajanaka put in chains. But when Polajanaka proclaimed his innocence, miraculously his chains fell off and he was able to escape to a small village near the frontier of the kingdom. Since he was a strong leader, he attracted many followers.
In time he decided to take his revenge by declaring war on King Aritthajanaka. Before Aritthajanaka went to battle with his brother, he made his pregnant wife promise that should he be killed, she would flee from Mithila in order to protect the unborn child. 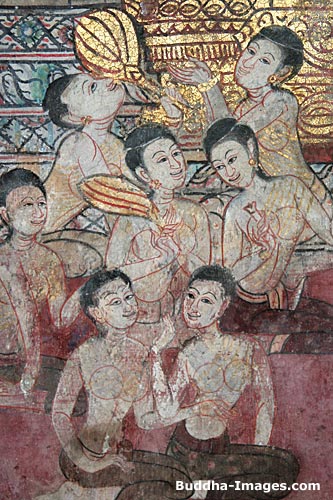 Scene from the Mahajanaka Jataka.

When she heard of the king's death at the hand of his brother, Polajanaka, she gathered her gold and jewels into a basket and covered them with rice. She put on some worn and dirty garments and blackened her face with soot so that she would not be recognized. Then, lifting the basket onto her head, she went unnoticed out of the city by the northern gate. Now, the child in the fleeing queen's womb was to be a Great Being, or Bodhisatta, and the attention of Sakka, king of the gods, was drawn to the queen's plight. He therefore attired himself as an old man driving a carriage. On arriving at the queen's side, he asked her where she was bound. She had in mind to go to the city of Kalacampa, sixty leagues away, but did not know the way. The disguised god offered to take her there, and after entering the carriage, the queen fell into a heavy sleep. By nightfall the carriage had reached the edge of Kalacampa. When the amazed queen asked how they could have reached the city so soon, Sakka told her that he had come by a straight road known only to the gods, then departed.

In Kalacampa, the unrecognized queen was observed by a northern Brahmin teacher of great fame. When he asked who she might be, she told him, "The chief queen of King Aritthajanaka of Mithila, lately killed in battle. I have come here in order to save the life of my unborn child."

The Brahmin invited her to live in his house, saying that he would watch over her as if she were his younger sister. The queen agreed, and a short time later she gave birth to a son, whom she called after his grandfather Mahajanaka. He grew into a strong and sturdy child. However, he was often teased by his playmates and called "the widow's son," which name brought questions to his mind regarding his paternity. One day he went to his mother, threatening to bite off her breasts if she did not tell him who his father was. She was forced to reveal to him the secret of his birth-that he was the son of the former king of Mithila.

When the boy reached the age of sixteen, he determined to regain his father's kingdom. He told his mother of his plan and she offered to give him her gold and jewels, which were sufficient to win back the kingdom. But he took only half of her gift, wishing to make his fortune in trade. She was alarmed for his safety, warning him of the dangers of the sea, but he was deaf to her words. After purchasing some goods for trading, he boarded a vessel bound for Suvannabhumi, the golden land of the east. On that day his uncle Polajanaka, king of Mithila, fell ill. 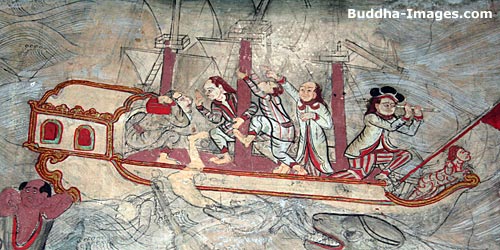 Crowded on board were the men and animals from seven large caravans. After seven days of plunging through the heavy seas at top speed, the overloaded ship began to founder. Planks broke off, and the water rose higher and higher. Mahajanaka, knowing that the ship was sinking, did not panic. He prepared himself for the ordeal by eating a full meal, covered himself with sugar and ghee to protect himself from the water, then tied himself to the mast. When the ship went down, men and animals were devoured by the sharks and fierce turtles that infested the ocean, but the mast remained upright. Mahajanaka with his superior strength was able to throw himself a far distance from the ship, thus escaping the fate of the other passengers. On that day Polajanaka died, leaving the throne of Mithila vacant. 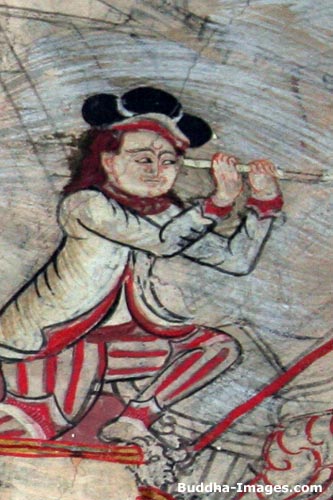 The Mahajanaka Jataka -
Notice that the crew includes some foreigners, a common feature in Thai mural paintings.

Mahajanaka floated in the ocean for seven days, taking no food. During this time the goddess Manimekhala was enjoying the pleasures of heaven, neglecting her duties as guardian of the seas. At last she spied him and recognized that he was not an ordinary mortal. She took him in her arms, and Mahajanaka, thrilled by the touch of the goddess, fell into a trance. She flew with him to a mango grove in the kingdom of Mithila, where she laid him on his right side on a ceremonial stone in the middle of the grove. 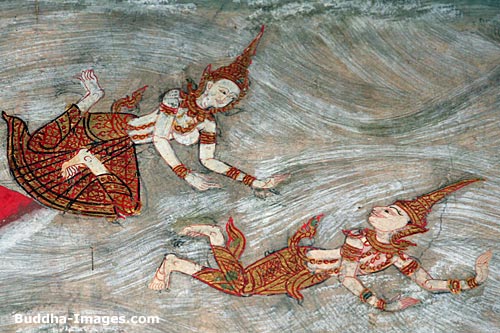 The Mahajanaka Jataka -
Mahajanaka is saved by the Goddess Manimekhala

From his deathbed, the king of Mithila had told his ministers that to find a man worthy of being king, they must look for one who could answer certain riddles, who could string the king's powerful bow, and who could please his daughter, the beautiful and intelligent Princess Sivali. There were many candidates for the throne. Each one, in an effort to win Sivali, obeyed her every whim. The more they tried to please her, the more she scorned them and sent them away. Moreover, not one had the wit to answer the riddles or the strength to string the royal bow.

At last the ministers decided to send out the festive chariot to see if they could find a successor to Polajanaka. They decorated the city, yoked four noble steeds to the handsome carriage, and bade the musicians follow behind as is proper when a royal chariot is empty. Then they ordered the carriage to lead them to the one who had sufficient merit to be king of Mithila. Followed by a great crowd, it took them through the city to the eastern gate and onward to the park where Mahajanaka lay sleeping. After circling the stone, the chariot came to a stop. The ministers observed the sleeping prince and examined his feet, whereby they recognized the signs of royalty. Indeed, they saw that he was not only a future king but also destined to be emperor of four continents. They commanded the musicians to sound their instruments. At the noise, Mahajanaka awoke. Seeing all the people around him, he recognized that the white umbrella of kingship had come to him. He asked where the king might be. When told that he had died, he agreed to accept the kingdom.

Meanwhile, Princess Sivali was waiting. However, when the new king arrived he did not visit her or pay her any attention. One day when he was strolling in the garden, she could bear his indifference no longer. Running up to offer him her arm to lean on, she showed that he pleased her. Shortly thereafter she became his queen.

King Mahajanaka answered the riddles with ease. He was also able through his great strength to string the bow of King Polajanaka, so that he fulfilled all the conditions for becoming king. Wisely and well he ruled for seven thousand years. His wife Sivali bore him a son and heir to the throne.
One day the king was riding through his kingdom with his ministers when he observed two mango trees. The one that had been full of mangoes was broken and torn by the people who had come to pick the fruit, while the other, though barren, stood green and whole. Thus he came to understand that possessions bring only sorrow, and he determined to put aside his kingdom and take up the life of an ascetic. After shaving his head and putting on the robes of a hermit, he departed from the palace. But Queen Sivali, who loved him, followed him with great retinue. Wherever he went, she was behind him. At last he could bear it no longer. He cut a stalk of grass and said to her, "As this reed cannot be joined again, so you and I can never be joined again."
At his words, Sivali fell down to earth. While the courtiers were attending to her, Mahajanaka disappeared into the forest. When the queen awoke, she could find him nowhere. He was never again seen in the world of men, for he found his way to the Himavat forest and eventually entered the Brahma heaven.
The despairing queen returned to Mithila and arranged for the coronation of her son. Having settled the affairs of the kingdom, she herself donned the robes of a hermit, and after many years she too was deemed worthy of entrance into the kingdom of the gods. 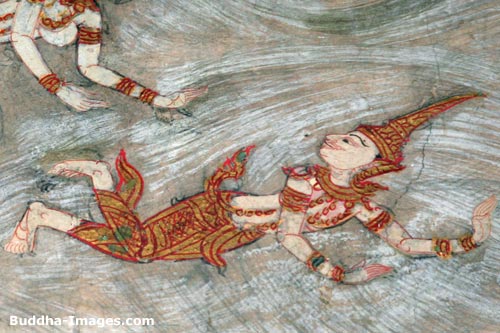 The Mahajanaka Jataka -
Mahajanaka looks up to his saviour, the Goddess Manimekhala.