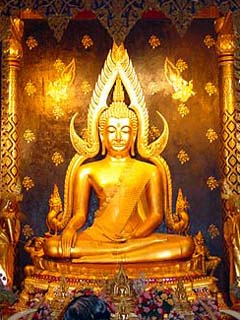 Scientifically speaking, Gaudama Buddha is a historical figure, though his exact date and year of birth is not clearly established. The Buddha started his life as Prince Siddharta, and was born in Lumbini (presently located in Nepal). Initially he led a well protected life inside the palace grounds, until at the age of 29 while wandering outside he palace, he encountered the sufferings of old age, disease, poverty and human decay in general. He set out on a long solitary journey, and left all his possessions behind. He grew tired and renunciated all worldly pleasures, realizing that all these never lasted long and that life was in fact full of sufferings. By doing so, he intended to discover the Ultimate Truth of the whole existence, so as to find a sure way out of all suffering.

He spent his time meditating in solitude, and doing everything which he believed to lead him to success, for instance, starving and torturing himself until he become weak and thin. After his self-mortifications, he finally found that the best way to success was 'The Middle Way', that is : avoiding the two extremes of indulging oneself in pleasures or torturing oneself to the utmost. He became enlightened in one full-moon night under the Bodhi three on the bank of Nerunjara River, in the state of Magadha, when he was thirty-five years old, after spending six years altogether in search of truth. 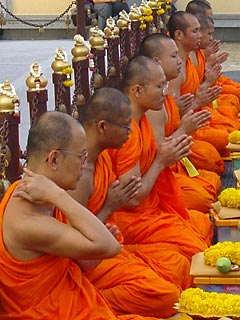 The Three Characteristics of Existence :

1) Dukkha - Often this term is translated as suffering. Dukkha tends to refer to anxieties experienced in the course of living. If you set a goal and are experiencing difficulty attaining it, this can be Dukkha. If you love someone and that person does not reciprocate, that may amount to Dukkha. If you try and control your child and that child seeks his or her own way, this could become Dukkha. Let us say, Dukkha implies a gap. There is nothing wrong with goals and gaps (Buddhism has occasionally been criticized for making people lazy or lackluster; and this is simply not true). It is when a gap cannot be managed that one experiences Dukkha. Often the metaphor for progress in Buddhism is a path. If you are not able to attain your goal step by step you may become frustrated. Again, the gap is not the problem, it is how you perceive it and how you deal with it that matters most.

2) Anicca - This is impermanence. All things are subject to the forces of nature. Even the rock is gradually worn down by the incessant rain drops. Intellectually, at least, this principle is not that hard to understand.

3) Anatta - This is one of the most challenging concepts in the Buddhist teachings. Anatta is often translated as no-self or not-self. This idea relates to the non-substantiality of self or personality. In other words, the self or soul that we may believe is ours does not really exist. There is nothing to cling to. In the West, we often hear people proclaim that they are seeking to find their 'real self' - for Buddhists there is no such thing. According to Buddhism, we are very lucky to have been born in a form that tends to maintain its shape as we move from task to task. Our compounded form comes into contact with nature and must fight disease, discomfort, and changing conditions. Since there is no essence, no constant state of being, we are subject to many different (impermanent) conditions. Furthermore, how we perceive ourselves may not be the way that others perceive us. We must meet others and the changing conditions around us with a flexibility (grounded in the spirit of ethics). If we do not adjust our self when conditions change, Dukkha will most likely follow.

Thai people use the terms dukkha ( thuk ) and anicca ( anichang ) often in daily speech. They tend to be relatively open to change and accepting loss, but this does not mean that they simply accept fate blindly. Understanding fate and the momentum of karma is different from being fatalistic.

The dhamma, or 'Buddhist life', encourages the Eightfold Path, to put an end or control the existence of Dukkha (suffering) :

A synonym for the Buddhist teachings is The Middle Path.

Aside from this, most Thai Buddhists people in the fundamental principle of reincarnation : we can be back and do it right then. The concept of reincarnation has profound implications for Thai society. Bad circumstances (poverty, physical handicaps etc) are related to bad behaviour in a previous life. The concept of 'do good, and you will get good', 'do bad, and you will get bad (if not now, then in a later life)'. Thais also very much believe in the concept of 'making merit'. There are many ways of doing so, one common way being collecting money for donations to temples etc. A belief is that making merit, will make you more effective in coping with the existence of suffering (in the next life). As good Buddhists, the Thai perceive that all living beings stand in a hierarchy of varying ability to make actions effective and of varying degrees of freedom from suffering. Making merits, according to this view, will get you higher in the hierarchy. 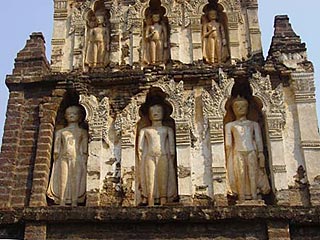 King Asoka of India (3rd century B.C.) was instrumental in spreading Buddhism around the Indian subcontinent. There are writings suggesting he sent missionaries to present day Thailand. Indian traders certainly did business along the shores of present day Myanmar, Thailand etc. and could have started the spread of the Buddhist religion in Thailand. King Mongkut (Rama IV) surmised that Phra Pathom Chedi in Nakhon Pathom probably was the first stupa to be built in Thailand, containing Buddha relics.

Nakhon Pathom was possibly the capital of the old kingdom of Suwannaphumi (approx. 139 B.C -457 A.D.), and in contact with King Asoka's India.
The Mons established the old civilizations of Dharavati (3rd to 7th century A.D.) and Haripunchai (present day Lamphun, about 1000 years ago). The Mons were Theravada Buddhist. Theravada Buddhism was established as the religion of the Sukhothai (first recognized Thai) Kingdom from the 13th century B.C. on.

Theravada is the school of Buddhism that draws its scriptural inspiration from the texts of the Pali Canon, or Tipitaka , which scholars generally accept as containing the earliest surviving record of the Buddha's teachings. As most other great religions, Buddhism has been subject to Schisms. At present Theravada Buddhism (southern Buddhism) is practiced in Thailand, Myanmar, Laos, Sri Lanka. Mahayana Buddhism is practiced in Korea, Japan, Tibet and China and originated as a reform movement in the early centuries of Buddhism. We will not go into the differences between the two important ways of practicing Buddhism.

To provide a social structure supportive of the practice of Dhamma, and to preserve the teachings for posterity, the Buddha established the order of bhikkhus (monks) and bhikkhunis (nuns) -- the Sangha -- who continue to this day to pass his teachings on to subsequent generations of laypeople and monastics.

You will find much more about Buddhism at these two sites.