The left hand lies in the lap, palm upward. The right hand bends over the right knee, with fingers slightly touching the ground.
During meditation, Siddhartha is subjected to many temptations many posed by the evil Mara, who bombards him with his demons , monsters, violent storms and his three seductive daughters. The Buddha remains steadfast. Then to testify to Mara of his meritorious past, he points to the earth with his hand and calls the Earth Goddess. Thorani, the Earth Goddess rises from the ground and wrings the water from her long black hair, by this action raising a torrential flood that drowns Mara and his army of demons.
This gesture symbolizes enlightenment, as well as steadfastness (imperturbability). It is easily the most common Buddha gesture in Thai wats. 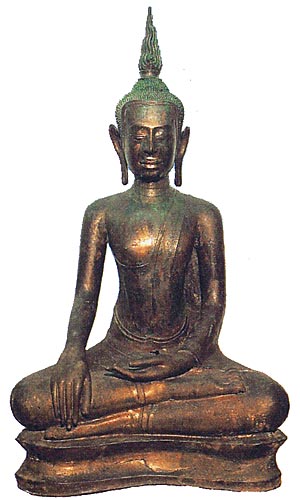 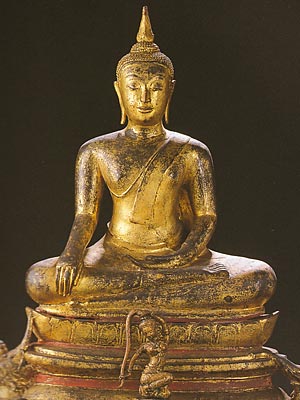 Subduing Mara - Calling the Earth to Witness
[the most common representation of the Buddha in Thailand]
The left hand rests on the lap, the right hand points to the ground, slightly touching it.
Mara (representing evil) and his horde offer all kinds of earthly 'pleasures' such as riches, power, women. However, the Bodhisattva scorns it all, and continues to contemplate.
Buddha image presently at Phra Pathom Chedi. 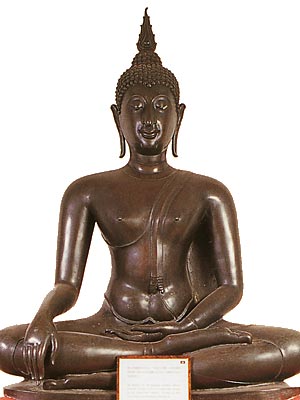 Sitting Buddha image, with the gesture of Subduing Mara.
In the style of the Sukhothai period.
Found at Wat Praya Krai (Jotanaram), Bangkok.
Image present in the cloister of the Ubosoth at Wat Benchamabophit, Bangkok. 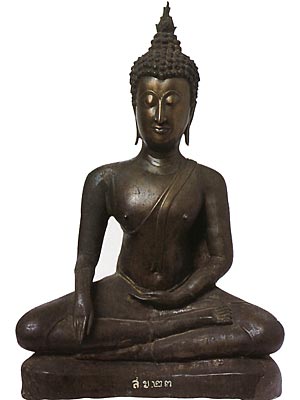 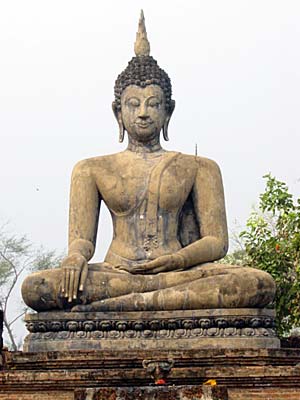