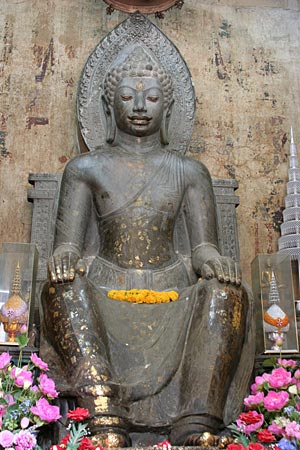 Dvaravati art - Buddha Image at Wat Na Phramen, Ayutthaya. Notice that the Buddha is seated in the 'European style'. The Buddha displays none of the 'classical' mudras, and His Hands are laying peacefully palms down on His Knees.

Dvaravati refers to a kingdom situated in the Chao Phraya river basin between the 7th and 11th centuries A.D. Presently Dvaravati art, including many Buddha images and sculptures, can be found at National Museum in many provinces of Central Thailand, such as Phra Pathom Chedi National Museum, Nakhon Pathom, U Thong National Museum (Suphan Buri), Prachinburi National Museum. All the above mentioned National Museums are certainly worth a visit.
The Dvaravati style derived from Indian archetypes such as Amaravati and Gupta styles, and were integrated with local art.

Dvaravati art and images went roughly through three stages : In the initial stage, there was heave Indian influence, later on the art became more independent locally, and still later influence of Khmer art is visible.

So, initially the faces depicted would resemble Indian sculptures. Later on, influenced by local styles, the aureole would appear in a lotus bud shape or orb over the cranial protuberance. Large hair curls are visible, and the eyebrows would resemble a crows wings curve, like a flying bird. Protuding eyes, with flat nose and thick lips are common. Standing Buddha images performing the Vitarka (Preaching) posture, with robes hanging to mid shin level (see example). In sitting images, a short mantle is placed over the left shoulder.

The Buddha is known as the Wheel-Turner : the One who sets the cycle of teachings in motion and in consequence changes the course of destiny.
It is worth remembering that during the early centuries of Buddhism, no sculptures of the Buddha were made, and the Buddha was represented by various symbols such as the Dharmachakra, the Bodi Tree, the Buddha's footprints etc.

Imparting Fearlessness (Reassurance). This gesture is made with the hand raised and the palm facing outwards, fingers extended pointing upward. The wrist is bent at a right angle with the forearm. The gesture is sometimes made with both hands. Sometimes the Abhaya Mudra is made with one hand, while another Mudra (such as Varuda Mudra) is made with the other hand. The Buddha may be either standing, sitting or walking. 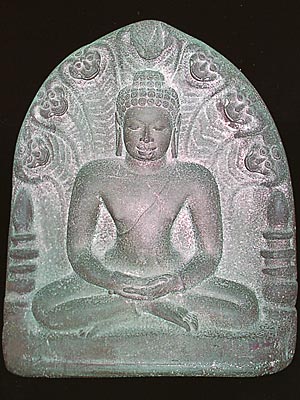 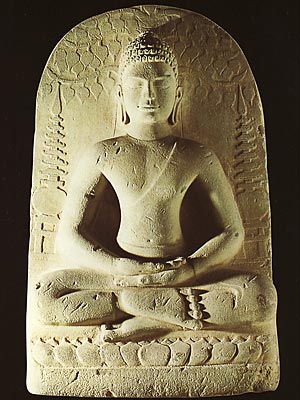 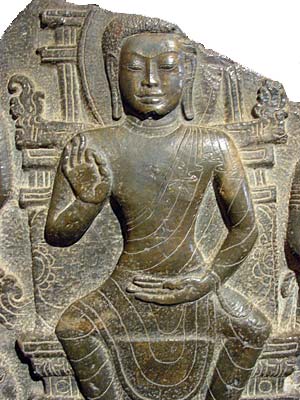 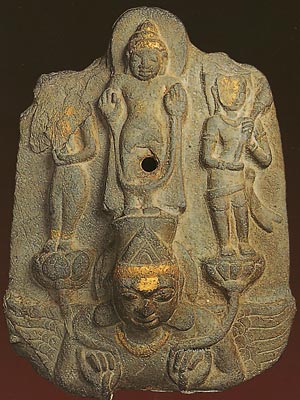 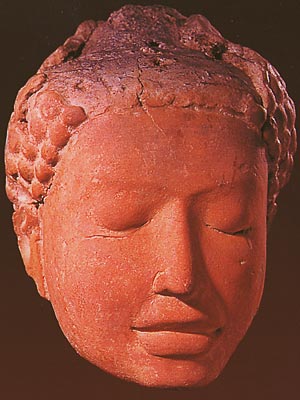 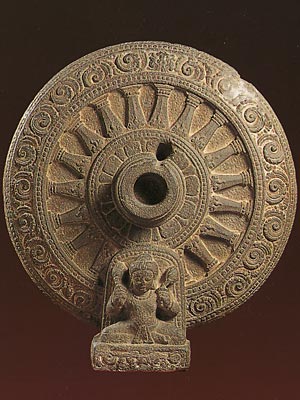