Buddha images were not made during the first few centuries after the life of Lord Buddha. They first appeared during the 1st and 2nd century A.D. in India. Almost immediately, a set of rules developed on how the Buddha should be depicted. It is worth remembering that a Buddha image is considered to be a hypostatis, endowed with supernatural powers and therefore has to be properly rendered. The Buddha is believed to have 32 major characteristics (and more minor ones).

Examples (that can be seen on Buddha sculptures) :

The Buddha is always in one of four postures deemed suitable : Sitting, Standing, Walking or Reclining Postures. The dress of the Buddha is the monastic robe, draped over both shoulders, or with the right shoulder bare. 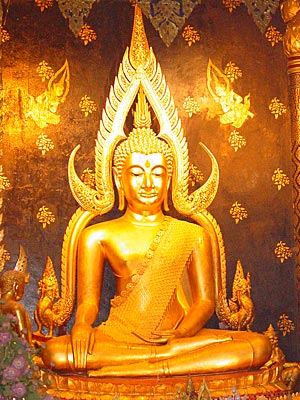 Walking Buddha,
with the gesture of Imparting Fearlessness.
The 'walking' Buddha is an innovation in presenting the Buddha, originating during the Sukhothai era.
From Wat Ratchathani, Sukhothai province.
Presently in the cloister at Wat Benchamabophit, Bangkok.