An Overview of Buddhist Temples in Thailand

Buddhist temples in Thailand (otherwise known as 'wat') are located in temple compounds and consists of a number of buildings with different architecture, function and importance. Most temples, of course, since having been built in the last century, will be in 'contemporary' or Rattanakosin style, but on the tourist trail and when visiting well reknown wats, you will find different architecture, related to the historical period when the temple compounds were built. Of course, there is a whole science involved in describing the different cultural, religious and architectural aspects of different temples and Buddha images, which goes behind the scope of this summary.

To the layman, the structures inside a temple compound may all look 'similar', but just a little information will allow you to name and localize the different constituent parts.
Important structures include : 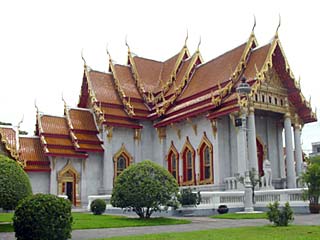 The bot or ubosot(h) is the ordination hall of the wat, and is where new monks take their vows. In structure it often resembles (for laymen) the wiharn or sermon hall, but can be differentiated by observing the sacred boundary stones around it.
Bots are sometimes only open to the monks. Inside an altar with several Buddha images.
Ubosoth at Wat Benchamabophit, Bangkok. 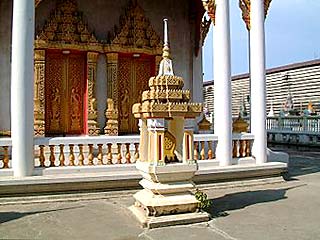 Sema (sima) or boundary stones, six in total, around the ubosoth at Wat Bangnanggreng. Sima stones often come in the form of large stone leafs.

The Viharn or Sermon Hall is often a quite busy building at the wat compounds. Contrary to the ubosoth it does not have sima stones as a boundary. It contains (as the bot) usually a major and many smaller Buddha images, and there are worshippers performing religious rites at most times of the day.

A Sala is a pavillion structure, open on all sites, where people can also take a break during temple visits. 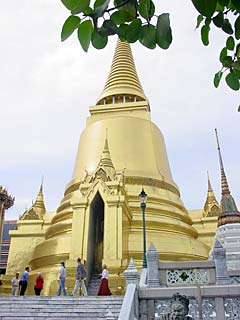 A chedi (in other cultures and locations a similar structure is often called a stupa or a pagoda) usually is a domed solid structure. Inside or underneath relics of the Buddha or revered Buddhist teachers are located.
(Chedi at Wat Phrakaew, Bangkok) 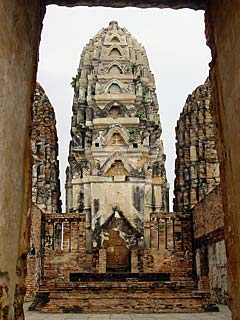 Prangs can be found mostly at older temples in Sukhothai, Ayutthaya, Lopburi and in the Khmer temples in Isaan province (Phimai, Phanomrung). However this Khmer or Ayutthaya style structure can also be found in Bangkok (Wat Arun, Wat Pho, Wat Phrakaew). It invariable is described as having the form of a vertical corn ear.
(Prang style building at Sri Sawai, Sukhothai) 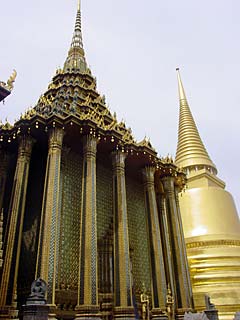 A Mondop is a square based structure usually topped with a spire. It is often erected above the libray holding the sacred Buddhist scripts.
(Mondop at Wat Phrakaew, Bangkok)
The Ho Trai is the library of the wat and usually is small and highly decorated. 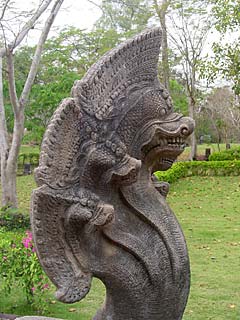 The Naga represents a mystical serpent like animal that according to the Buddhist scripts sheltered the Buddha during meditation. The Naga is often present at the beginning of a staircase to the temple (like at Wat Doi Suthep, Chang Mai). Khmer art has given us many marvellous stone sculptured Naga, such as at Phimai and Phanomrung in Eastern Thailand.
(right : Naga at Phimai, Eastern Thailand) 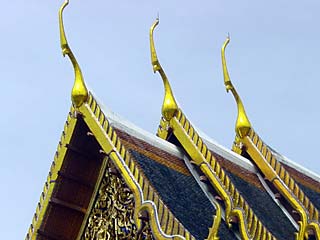 Chofa(h)s are hornlike finials on the roof ridges of temples, and represent the head of the mystical garuda. They are very characteristic of Thai temples, and add a lot to their overall attractiveness.
(Chofas at Wat Phrakaew, Bangkok) 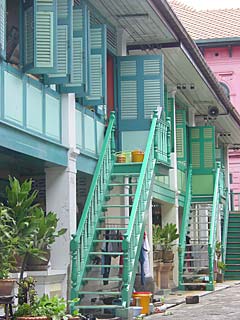 Kuti are the quarters for the monks that reside in the temple compound. They can come in all forms and shape.
(colorful monk quarters at Wat Benchamabophit, Bangkok)

As with other places of worship, one should always be considerate and respectful. It is often forgotten that temples in Thailand are not just cute and offering a good photo opportunity. Most are still in 'use'. Just consider if you where participating in a religious service at home, and some bunch of tourists would enter your church, starting to take pictures of all statues and even your good self!

While using common sense goes a long way, there are maybe some particular sensitivities you need to know about when visiting Thai temples :

Dress properly. Clothing should cover shoulders and knees. Short skirts are not permitted. Some well visited sites have 'covering clothing' for hire for those who want to enter the temple compound.

You must remove your shoes before entering the temples. One can walk around wearing shoes in the compount itself though. In general people just leave their footwear at the entrance or stairs, but if you just happen to have purchased the latest expensive pair of Nike sportswear, maybe you should take it with you inside.

When sitting down in the wat, do not point you feet towards the altars or Buddha images. As a note, you should understand that feet are considered the 'lowest' part of the body, and you should also avoid pointing them to other people.

Women should never touch monks! Do not hand out something to monks directly. Just use an intermediary, or place an item on a table.

Do not go around touching or having fun in front of Buddha images.
Be considerate when taking pictures. Using telelenses might be acceptable when photographing worshippers.