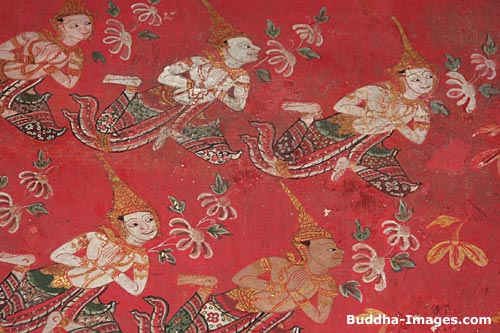 The Nimi Jataka -
Flying Devas in Heaven. They pay respect to Nimi. The falling three-petaled flowers symbolize the conferring of blessings, and are typical in paintings from the Ayutthaya period.

Once there lived a king named Makhadeva, who upon spying his first gray hair told his barber to pluck it out and put it in his hand. When the barber asked him why, he replied solemnly, "This gray hair is a messenger from the heavens. Four and eighty thousand years I have passed as a youth. Four and eighty thousand years I have been king. The time has come for me to renounce my throne and the worldly life, and to live the life of an ascetic eighty-four thousand more years." True to his word, King Makhadeva handed his kingdom over to his son, charging him to be alert to his first gray hair so that he too could take up the hermit's life and give the kingdom to his own son. And so it happened. Son after son after son of the line of King Makhadeva reigned until the sign of the first gray hair, then exchanged kingship for asceticism and, like their forefathers, upon death entered the heaven of pure intellect, Brahma's heaven.

Eighty-four thousand generations minus two passed, and King Makhadeva, from his place in Brahma's heaven, was pleased that all his descendants had followed his example. Then he pondered, "Will any of us attain Nirvana now?" He perceived that the state of nonbeing was not within the reach of any of his line. This being the case, Makhadeva resolved to round off his family line by coming to earth again as the son of his descendant the present king of Mithila. In this way he would be reborn as a king, bear one more son to whom he would give his throne, and become an ascetic once again. Then, after his death, he would watch his childless son turn to the holy life and finally end the cycle of Makhadeva's family.

When Makhadeva descended from Brahma's heaven, he was born as a Bodhisatta, and the soothsayers correctly foresaw that he was meant to round off his family. Hearing this, the king named his newborn son after the hoop of a chariot wheel. The Bodhisatta was called Nilni-Kumara, or Prince Hoop. According to tradition, when his father caught sight of his first gray hair young Prince Nimi became king.

As king, Nimi was faultless, ruling by example, giving alms, caring for the poor as if they were his own kinsmen, and observing in earnest the holy days. Indeed, he inspired many of his people to lead such good lives that upon death they reached the realm of Sakka's heaven. 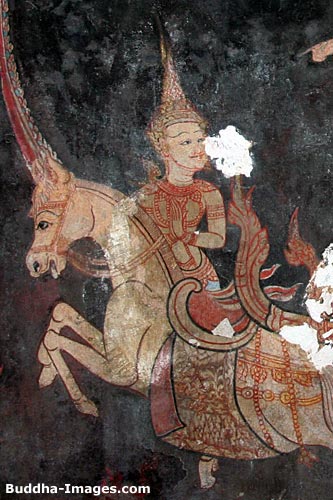 The Nimi Jataka -
Matali, the Charioteer, guiding Nimi on his visits to Hell and Heaven.

Now King Nimi, like all truly good men, was not satisfied with himself and yearned to know the answer to one great question: which is more fruitful, the holy life or faithful almsgiving? So strong was his desire to learn the truth that Sakka's throne became warm and the king of the gods sped in person to Nimi's chamber. The palace became like a fiery light as Sakka entered and explained : "Good King Nimi, I have come to help answer your question. The holy life, in which a man lives as an ascetic, is by far the more fruitful, for by meditating he can go beyond my heaven, where we gods still have senses and feelings, to Brahma's heaven, where only the intellect remains, and sometimes beyond that, to Nirvana. Nevertheless, almsgiving to all, regardless of caste, is right and befits a great man and a king such as you, King Nimi." Without further delay Sakka departed, leaving Nimi pondering his words.

When Sakka reached his home, Tavatimsa heaven, he described at length the good and pious King Nimi to the deities. They were overjoyed to hear of him, for some of them were former subjects of his, and they cried, "Let us see him ! We wish to look upon him again, for at one time from his very own lips we received his teachings, and through his example we attained Godhood." They persuaded the great Sakka to agree.
And so he ordered the divine chariot to appear and be readied for a journey to earth. Matali the charioteer was called upon to guide the chariot, pulled by one thousand thoroughbred steeds, to earth to bring King Nimi back to heaven to stand before the gods.

On the festival of the full moon, after traveling earthward for many days, the chariot appeared over the city of Mithila in the kingdom of Videha, whose people were still celebrating though it was late at night. Catching sight of the celestial chariot as it shone above their heads in the sky, they marveled at it and wondered what it might be. A second moon? A sign from heaven on this festival day? When they saw that it was a chariot, they realized that it must be Sakka's own vehicle come to their king, whose righteousness had caught the eye of the gods.

Matali guided the chariot to the eastern window of the palace, where King Nimi was seated contemplating; and as the moon rose in the east, Matali called out, "King Nimi! The deities of Sakka's heaven are well pleased with you and are longing to see you. I am sent by the King of the Gods himself to escort you to his realm."

King Nimi accepted graciously, but before entering the chariot, he told his people that he would not be gone long. As they rose into the sky, Matali asked him which road he would like to take first, the one to heaven or the one to hell. Nimi, knowing that whatever befell him, he would always be able to see heaven, chose the road to hell, saying, "Take me first to the bowels of the universe, to hell, where the condemned dwell."

Matali plunged the chariot into the blackness of the various worlds of hell. Fires blazed, and soon they saw below them the burning River Vetarani, covered with brine that erodes the flesh, emitting the most fetid odors, and filled with struggling sinners. Nimi wept to see such suffering and cried out to Matali, "0 Matali, what did those men do to be cast into such a river?" Matali told him in what ways they had been cruel and how their wrongdoing had begotten other evils. 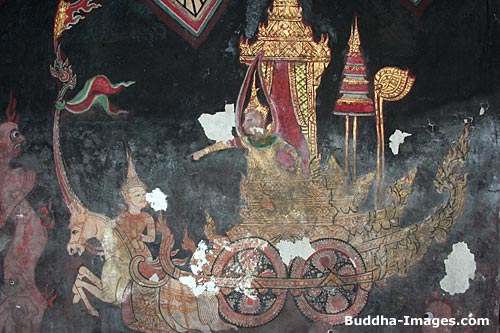 The Nimi Jataka -
Nimi visits Hell and points to the creatures suffering in it.

Then Matali made this river disappear and summoned the next hell to appear, where misers and men who had been selfish with ascetics and Brahmins were being torn by black dogs, crows, and vultures. Nimi shook and shuddered to see still another hell where those who had tormented other people were being pounded with hot lumps of coal, and another where perjurers and debtors struggled to climb out of a fiery pit. At the sight of the hell where animal haters struggled head-down in iron caldrons filled with boiling water or fire, Nimi was filled with fear and horror. 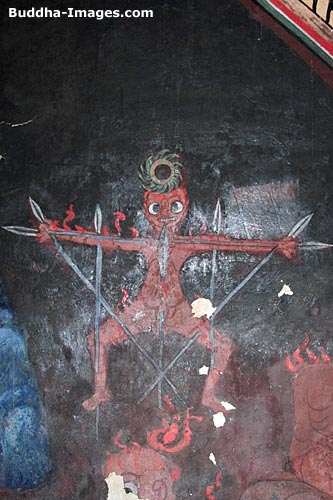 The Nimi Jataka -
Scene of torture in Hell. Spears and arrows are reserved for thiefs and cheaters.

But Matali was unrelenting. He was determined to show Nimi all the hells : the one where dishonest grain sellers lay prostrate with heat, having been given water which instantly turned to chaff as they drank ; the one where spears and arrows were plunged into the sides of men who had stolen and cheated others; the one where animal slayers were torn to shreds. Farther on, Nimi had to witness malicious men being forced to eat filth and garbage and those who had committed patricide and matricide drinking from a river of blood. Still farther on, greedy hagglers struggled like fish on hooks which pierced their tongues. Adulterous women wailed and waved their arms hopelessly, their upper halves in flames, their lower halves buried in mud. Still others strained endlessly to climb out of hell's windows, only to fall again and again. And Nimi grieved for them all that their evil deeds had brought them to this.

Meanwhile, the deities in Sakka's heaven wondered why Nimi was so long in coming. "Matali is wasting Nimi's lifetime visiting all the hells," they cried. "Tell him to hurry." Sakka sent a speedy messenger down to hell. When he finally reached them, he called out to Matali, "Show the king all the hells at once, that this visit be ended straightaway. The gods are impatient and are afraid you are using up Nimi's lifetime." Thus Matali opened all the worlds of hell to Nimi's sight, then turned the chariot heavenward and rushed the shocked Nimi away, his mind dazed by the horrors he had witnessed.

Swiftly the vehicle rose, passing heavenly mansions of great beauty, allowing Nimi to catch brief fragrances of gardens which perfumed the air, to glimpse crystal palaces which sparkled like gems, and to hear strains of cool celestial music sung by sweet nymphs and birds. To Nimi, each heavenly abode seemed more beautiful than the last, and at each he engaged Matali in conversation, asking, "What good did this mortal do in his earthly existence? Who was he that he attained such a celestial state?" Matali explained that the man who lived in seven mansions with his wives had in his lifetime given seven hermitages to seven hermits, that the women who dwelt in palaces of crystal with hundreds of columns, bells and banners, flowers and lakes, had been women who had always kept the holy days. He described how still others, who lived in mansions of gems filled with heavenly musicians playing lutes and singing, had fed holy men and provided their cities with parks and wells. 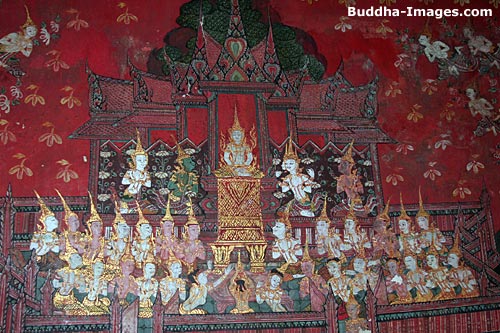 The Nimi Jataka -
Nimi preaches to the Devas in Tavatimsa Heaven.

See larger version of this picture.

When the long procession of horse-drawn carriages came to a halt, the royal pair found their son living in a hut of leaves prepared for him by Sakka. They saw that he had already put on an ascetic's garments of red bark and leopard skin, a black antelope skin over one shoulder and a carrying pole over the other. His hair was tied up and matted, and he held a walking staff in one hand. Temiya welcomed them and explained to them the reasons for his sixteen years of self-denial. In awe of their son, they no longer begged him to wear the crown but were themselves inspired to embrace the holy life. Returning to the palace, the king ordered the royal treasure jars to be opened and the gold to be scattered about like sand. Sakka built for the entire kingdom a hermitage three leagues long, so that all who aspired to Nirvana could partake of the meditative life.