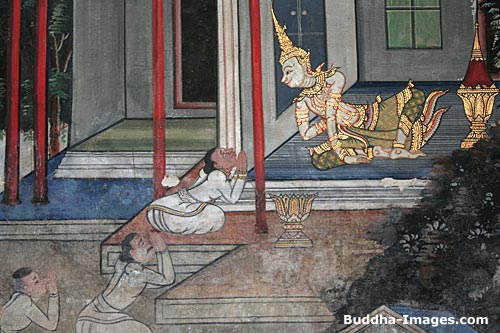 Scene from the Canda-Kumara Jataka.

In the Kingdom of Pupphavati near Benares, good Prince Canda-Kumara served his father, King Ekaraja, as viceroy, and became known throughout the realm for his patience and fairness in solving disputes. In those days, the chief court Brahmin, named Khandahala, had the ear of the king in all matters, both spiritual and temporal. This was unfortunate for the kingdom in general and Prince Canda in particular, because Khandahala was an unprincipled priest. An agent for the forces of evil, he had contrived to be appointed a judge, though he was in no way fair or honest, and was bent on destroying Prince Canda. The prince was the Brahmin's natural foe, for Canda was in fact the Bodhisatta and supported the powers of good in the world. 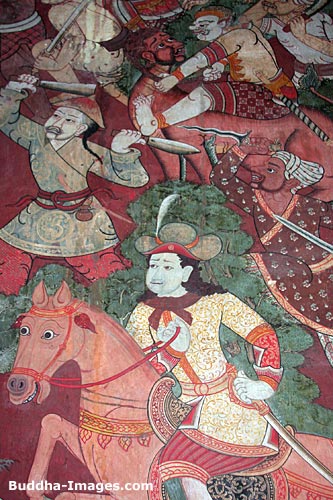 Foreigners (Westerners and Chinese) are depicted in scenes of the Canda-Kumara Jataka.

Now, it happened one day that Prince Canda was able to reverse a judgment that Khandahala had made in one case, and thereby restored some unjustly seized properties to their rightful owners. The news of this good deed spread to the people and they began to sing the praises of Prince Canda. They called on him continually to act as their mediator, and eventually the king conferred upon his son the office of judge. Khandahala grew more and more jealous of Prince Canda. He plotted innumerable ways to get rid of the young prince who had replaced him in the people's affections. He planned a revenge that he thought would encompass the prince as well as the whole community, which had ceased to pay attention to him. Before long, he was able to put his scheme into execution.

One night, King Ekaraja dreamed of a glorious bejeweled heaven populated by celestial beings. When he awoke, he was seized by an overpowering desire to enter this radiant world. Having little religious insight himself, he went out onto the porch of his royal hall and bade his chief Brahmin to come to him. Still dazzled by his vision, he asked Khandahala to tell him the way to this resplendent abode. Khandahala saw that this was his moment for revenge. As he knelt before the king , he said, "It will not be easy for you to find this realm, and it will cost you dearly. You must offer a splendid sacrifice to the gods. It must be made in units of four. Only such a gift can win the attention of those on high. Sons, queens, merchants, beasts, these four kinds, sacrificed with proper ritual, will gain you entrance into this heaven." 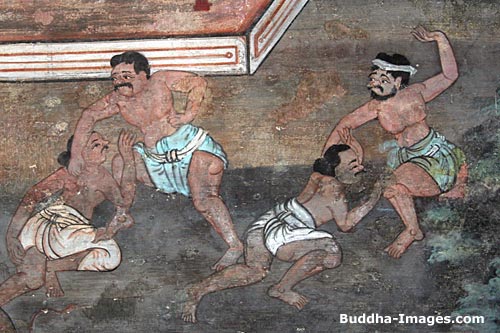 The Canda-Kumara Jataka - Victims are rounded up for the great sacrifice.

So greatly had the king's dream affected him that he was no longer sound of mind. As a result he succumbed to Khandahala's dreadful advice. He gave orders straightaway to prepare for a massive sacrifice outside the city walls. But Prince Canda soon divined the evil Brahmin's motives and grieved that so many should have to lose their lives on his account. He asked his father to forgo the sacrifice, not to save himself, for he was willing to die, but for the sake of the innocent victims. A great sadness hung over the city, and one by one those close to King Ekaraja came and told him that the Brahmin spoke falsely. His aged parents pleaded with him to put an end to the plans for this bloody ordeal. But the power of the Brahmin was such that the king paid no heed. His ministers, his son's wife, and even his little grandson begged that this appalling sacrifice not be carried out. Each time the king appeared to falter in his resolve, Khandahala rushed in to remind him that this was the only way to heaven. Wailing filled the city. Once the king weakened and released the hapless victims, only to call them back into custody under renewed pressure from the evil priest.

At last all was ready : the ground was cleared and a platform raised. The pyre was draped, and the banners were hung. Multi-tiered umbrellas marked the significance of the place. Horses and bulls, unaware of impending death, strained and snorted at their stakes, impatient for release. Canda sat apart from his fellow victims, but all awaited the same fate. Amid the company of the mourners assembled was Prince Canda's wife. Realizing that the king would forever be deaf to her appeals, she called upon the gods. Clasping her hands as she walked, she beseeched the gods to heed her. "We on earth," she said, "can do no more. It is clear that even the spirits here are blind to justice or else in league with falsity and guile. I therefore raise my plea to you on high to end this sacrifice forthwith before the innocent fall dead on these defiled grounds." 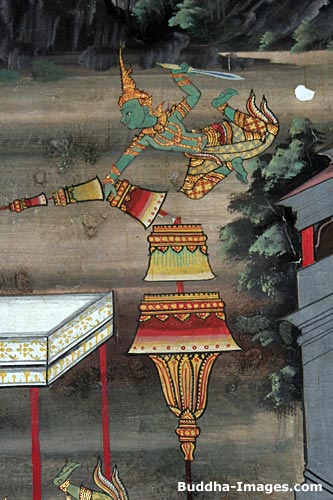 Suddenly, like a thunderbolt, mighty Sakka appeared overhead. Surrounded by a flaming aureole, he brandished a mallet and chisel with which he struck at the royal umbrellas. As they fell under the blows the sacrifice was terminated, for without the umbrellas the ceremony was no longer sacred. At this amazing sight the crowd broke into joyous tumult, while the victims danced in a wild frenzy. The animals whinnied and roared in fright and broke their chains. People were crushed beneath the stampeding herd. The king swiftly mounted his elephant but had no place to turn. The crowd set upon the evil Brahmin and beat him to death. They would have killed the king as well, if Sakka had not restrained them for the sake of Prince Canda. He was, however, sent into exile and made to live as an outcast, though his son never forgot him and saw to his needs. Gods and goddesses joined the people in the great festive occasion that was Prince Canda's coronation. As king, he continued to be just and self-restrained, and his reign was long and peaceful, ever worthy of a future Buddha. 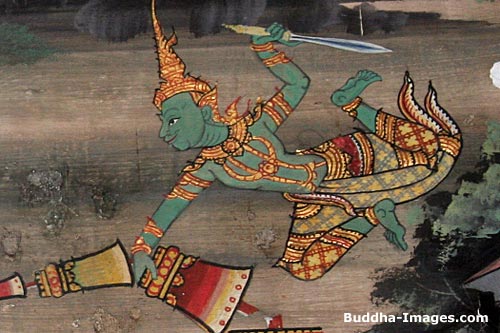