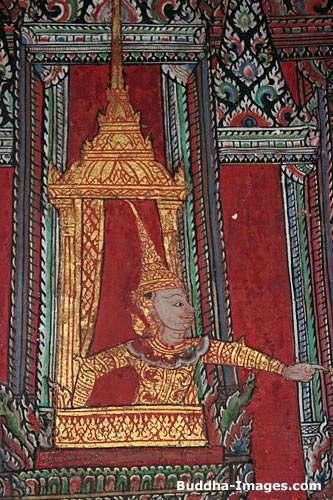 The Mahosadha Jataka -
King Vedeha, in his palace, laments the attack on his Kingdom

In the Kingdom of Mithila ruled a king called Vedeha, who was instructed in the ways of the law by four sages. At dawn one morning the king was awakened by a fantastic and frightening dream. His whole world had been illumined by fire which rose in four columns from the corners of the world. Suddenly in the center a fifth flame arose, which was at first only the size of a firefly. As King Vedeha watched, the fifth flame grew in height and glory until it encompassed all the other pillars of fire. At the same time multitudes of people passed through the flames without harm. Terrified, the king consulted his sages about the meaning of such a scene. The four wise men interpreted the dream to mean that a fifth sage would soon appear who would surpass them all. They themselves represented the four original columns of fire, and they saw in the dream their fame consumed by the growing splendor of the fifth and central flame. And, in fact, on that day a Bodhisatta, or future Buddha, was conceived in the womb of Lady Sumana, the wife of a wealthy merchant in the market town at the east gate of Mithila. At the same instant, a thousand other sons of the gods were conceived in the families of other rich men so that the Bodhisatta would be properly attended.

Nine months later, the Lady Sumana brought forth a child the color of gold who was called Mahosadha. In his hand he clasped a medicinal herb which caused a painless birth for his mother and which cured all the sick who had gathered to see this marvelous infant.

Throughout his childhood Mahosadha grew in wisdom. At the age of seven he demonstrated the architectural talents which would later save both his kingdom and his king from destruction. He built a great hall with many rooms and surrounded it with lakes covered with lotus blossoms. There he would sit dispensing advice to petitioners who needed aid. And his childhood was a happy and peaceful time in all the kingdom, for a Bodhisatta had made his appearance. 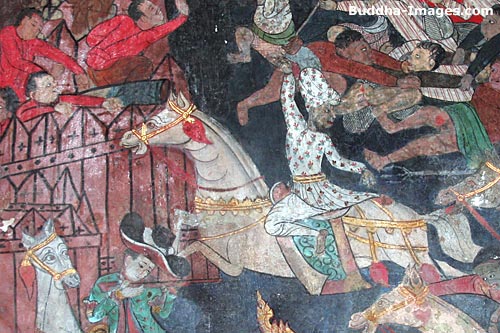 Recalling his dream, King Vedeha decided to fetch Mahosadha to his court. The four sages were sent to find him, but they too remembered the prophecy and were reluctant to hasten their own fall from authority. They were so overcome with jealousy that they plotted ceaselessly to keep the Bodhisatta away. Each sage devised trials and riddles intended to prevent Mahosadha from reaching the king's presence. However, the boy solved whatever was set before him with great cleverness and at last had to be admitted to the court.

For many years Mahosadha instructed the king in matters both spiritual and temporal. At the same time, he had to be on guard constantly against the devious tricks of the old sages. However, he was able to thwart their jealous maneuvering and firmly directed King Vedeha into proper behavior, despite the king's childish tendency to believe whatever he was told and to obey his impulses regardless of' the consequences.

During these years one hundred and one kings of India united under the leadership of a wicked sage called Kevatta and set out to conquer the whole of India. However, Mahosadha had not been idle. He had rebuilt Mithila's defenses and had sent spies to live among Kevatta's men, so that he was prepared to meet each challenge as it arose. When the kings laid siege to Mithila, Mahosadha was ready. 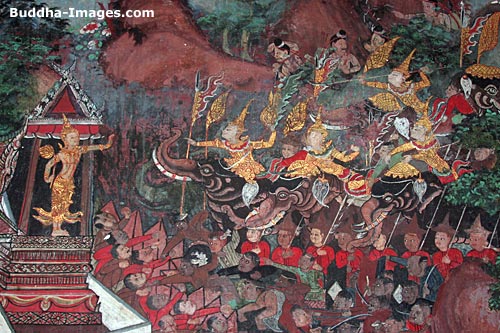 Mahosadha confronts the attacking Indian armies, led by King Culani. Notice that one hand of Mahosadha holds a monk's fan.

See enlarged version of this image.

As the mighty forces approached the city, they were greeted by sounds of a festival in progress. Dismayed by the inhabitants' apparent lack of fear, the kings conferred and determined to cut off the water supply. Mahosadha responded by causing huge fountains to be built, and water flowed out of the city in prodigious quantities. Realizing that Mithila must have deep wells and vast stores of water, the kings next attempted to starve the city into submission. Whereupon Mahosadha had huge amounts of food dropped over the walls, saying that Mithila had more than it could use. Perhaps the enemy army might be hungry. The hundred and one kings were astonished. They determined to stop all fuel from entering the city, but once again they had no success. Mahosadha caused great pyres of wood to be burned in the moats surrounding the walls, demonstrating that he had an enormous surplus of fuel. 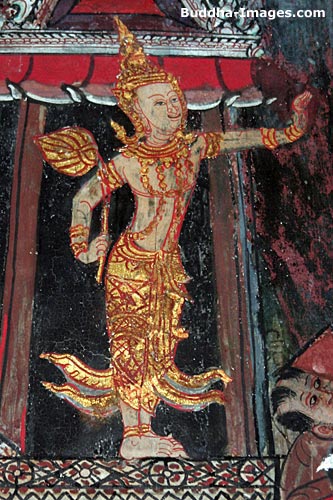 The kings redoubled their efforts to take the city, but to no avail. Mahosadha, watching from the ramparts of Mithila, anticipated their every effort to gain access to the city. Finally, near despair, Kevatta thought of a last ruse: "We shall meet outside the gates," he proposed, "and Mahosadha will have to salute me, for I am by far the elder. We know that whoever does obeisance is conquered. This is one contest he cannot win." Mahosadha instantly realized the implications of this challenge and devised a trick which would thwart the wicked Kevatta once again.

Having learned from his spies of Kevatta's surpassing greed, Mahosadha advanced outside the city gates carrying an octagonal gem which glittered enticingly in the sunlight. Pretending to offer it to his enemy, Mahosadha dropped the jewel into the dirt. Kevatta immediately lunged to retrieve it. As he knelt on the ground, Mahosadha held Kevatta's shoulder blades with one hand and his back with the other so that the grasping sage could not stand up. Holding him thus, Mahosadha shouted loudly, "Rise, teacher, rise! I am younger than you, young enough to be your grandson. Do you no obeisance to me!" Hearing these words, the hundred and one kings and their armies became frightened. If Kevatta had made obeisance to Mahosadha, then they were indeed lost. Without stopping even to retrieve their weapons, they fled.