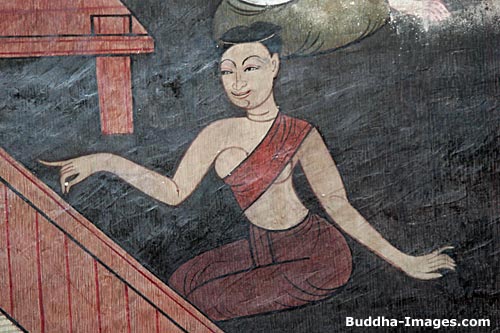 Scene from the Vidhura-Pandita Jataka, woman in courtyard.

At one time , thousands of years ago, the Bodhisatta came to earth in the person of a sage named Vidhura-Pandita. He was no ordinary man of wisdom. His life's purpose was to speak the truth, and in such a way that men would be held spellbound by his voice. As chief counselor to the righteous King Dhananjaya in the city of Indapatta, Vidhura fulfilled his mission well. His eloquent tongue had such power that one hundred and one kings from faraway lands, hypnotized by the sage's sweet voice, were unable to return to their kingdoms.

He was known throughout many worlds. A naga queen, after hearing her husband describe the incomparable sage, longed to hear him speak. But it would have been unseemly for her, a mere female, to ask her husband to bring Vidhura to her. Instead, she feigned illness and took to her sickbed, moaning aloud that only one thing could cure her : the heart of Vidhura. "0 King, 0 Monarch of the Nagas," she cried. "Bring me Vidhura's heart or I shall die!"

The king was so distraught that his face became instantly old and withered, like a lotus touched by human hands. How could such a feat be accomplished? Who would have the mind and heart to carry out such a low deed? For though the king wished to save the life of his queen, he also knew the peerless qualities of the sage and mourned the need to command such an act. At that moment he caught sight of his beautiful daughter, Princess Irandati, and resolved to send her out to seek a husband who could wrest the heart from Vidhura.

The princess went off to the Himalayas to gather fragrant flowers of all colors. She adorned herself with them and made a bed of the most beautiful ones. She then began a seductive dance and sang, "What god or human, what gandhabba or sage, what naga or yakkha (yak), able to make all wishes come true, will marry me this very night?"

At that time a yakkha, or demon, named Punnaka was riding on his magic horse over the Black Mountain. Hearing Irandati's love call, he stopped short, listened, and changed his course to ride over to her. Completely enamored, he resolved to marry her. Together they rode to the palace to ask her father's permission to be joined in wedlock. The king secretly rejoiced that his plan was bearing fruit, but to Punnaka he sternly announced that he would agree to the marriage only on one condition : that Punnaka first obtain the flesh of the heart of Vidhura. 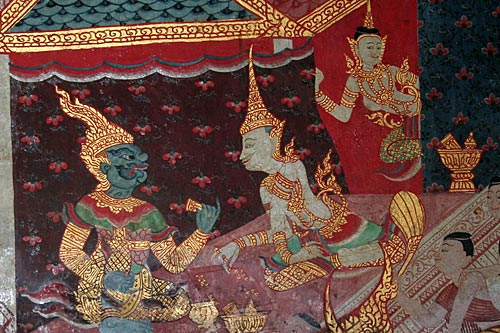 Punnaka, the Yak, plays the dice with King Dhananjaya. The King's guardian is looking from behind a curtain.

Pleased at the chance to prove his magical powers, Punnaka readily accepted the offer. His hair trimmed, his horse sparkling with jewels from ear to hoof, Punnaka, sumptuously dressed, rode off into the sky to Indapatta, the kingdom where Vidhura dwelled. Before he reached the city, he made up his mind to win the sage as his prize in a game of dice to which he would challenge King Dhananjaya. Once inside the city's gates, he said, "0 mighty king, accept a game of dice with me, and if you win, a wondrous horse and magic gem will be yours." Whereupon he demonstrated the supernatural power of his horse to walk on water, stand on the palm of his hand, fly in the air, and gallop along the narrow city wall. The yakkha then commanded his precious lapis lazuli to perform miracles, to create living things, other worlds, the sun, the moon, and the constellations. The king was so dazzled by Punnaka's magic possessions that he accepted the game, saying that should he lose, "Except my body and my white umbrella, all that I have shall be yours."

That was just what Punnaka wanted to hear, for he knew that he would use his magic to turn his opponent's dice against him and win. The hall was readied, a central platform was cleared, and other kings were called in as witnesses. The dice board was set up, and the two sat down to play. Punnaka insisted that the king have the first play. The dice were thrown. But something strange was happening. The king could see the falling dice turn against him by some magic power. Now, this perplexed him, because whenever he engaged in play, his guardian deity, his mother in a previous existence, was always there to see that he won. This time, however, she could do no more than hover in a doorway behind the king and warn him before the dice fell that they were about to go against him. Heeding her advice, the first time the dice were thrown he deftly caught them and threw them again. A second time they fell against him.

It became evident that the goddess could no longer help him, because Punnaka's magic was more powerful than hers. Moreover, when Punnaka noticed that the king was aware of the way the dice were turning, he recognized the existence of an opposing force. All at once he spied the guardian goddess behind the king. To end her power, he glared at her with a murderous look in his angry eyes. Alarmed, the delicate deity fled from the pinnacled roof to the top of a nearby mountain. From then on, Punnaka's magic held sway, and the third time the king tossed the dice, he let them fall and lost. The yakkha then took his turn and won. Punnaka, gleeful in victory, clapped his hands and called for his payment : the sage Vidhura. The king was jolted. "Vidhura? My most trusted counselor? My refuge and strength?" Punnaka was unrelenting. "Are you the king's slave or his kinsman?" he rudely shouted at Vidhura, knowing well that Vidhura would answer in the most humble way. Vidhura agreed that he could be given away, and it was thus that he was delivered into the hands of the ill-intentioned yakkha. 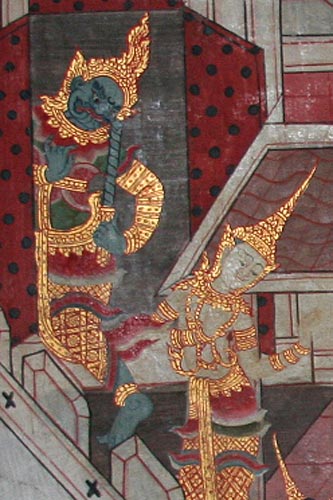 Vidhura is about to be taken away by the Yak Punnaka. He is taking leave from his family (not in picture).

But first, Vidhura asked Punnaka's permission to preach to his wives and sons. In keeping with his purpose on earth, he felt that he had to explain the principles of the doctrine before he could take leave of them. On the third day, he had completed what he had to say and calmly resigned himself to his unknown destiny. His wives, sons, servants, and friends all wept and prostrated themselves at his departure. Punnaka looked upon his victim and declared, "You are about to cross from life to death. A long journey awaits you. Take hold of the tail of my magic steed. You shall not see again the world of men." The Bodhisatta answered resolutely, "I fear no being, for I have harmed no one, in mind or in speech or in deed. Therefore nothing can harm me." Whereupon he pulled his garments about him and gripped the horse's tail. In this way, they galloped across the sky to the Black Mountain. But contrary to Punnaka's hopes, neither the rocks nor the trees there so much as brushed Vidhura, and when they reached the peak, his victim was still alive. Punnaka then tried to frighten Vidhura to death. He took on many shapes which would have made the most courageous of men swoon. Yet demons, lions, elephants, gigantic serpents, whirlwinds-all these terrifying forms failed to ruffle the calm of the Bodhisatta. 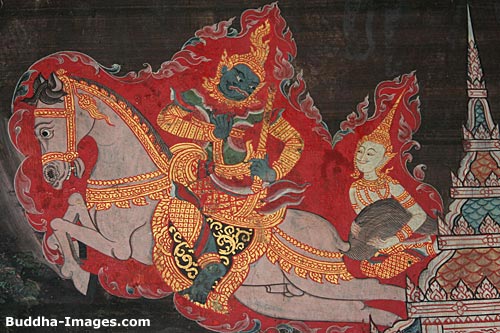 Vidhura holds on to the tail of the horse of the Yak Punnaka. However, despite a wild ride, he never gets hurt.

Punnaka, so expert at manipulating nature through trickery and disguise, realized that he could no longer resort to those means to kill his prisoner. He would have to use his own hand. In a flash, he seized the sage violently and, from where he stood at the summit of the mountain, whirled him around with his head downward facing the open expanse of the world. Dangling there, upside down to the earth, he, the embodiment of truth and wisdom, quietly addressed his executioner. "What is your reason for killing me?" When Punnaka told him why, the Bodhisatta immediately perceived that all concerned had misinterpreted the naga queen's request for his heart. She had not meant his physical heart. It was the heart of his wisdom that she desired. 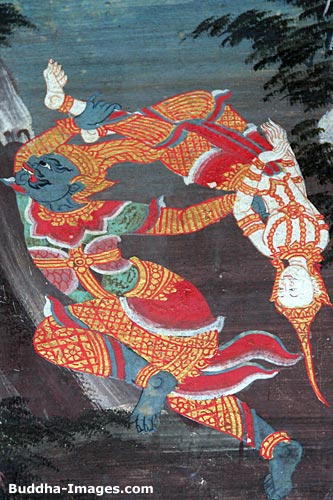 Vidhura was content, however, to say simply that if Punnaka would first listen to his teachings, he would then be willing to give up his heart to him. Punnaka placed him on the ground, and at that moment a richly decorated throne appeared beneath the sage. Punnaka listened at Vidhura's feet, his hands joined in reverence. It was then that the giant became deeply conscious of his wrongdoing and was converted to the Right Way. He told his prisoner that he was a free man again. Rather than return immediately to his kingdom, however, the Bodhisatta asked to be taken to the naga kingdom in order to resolve the misunderstanding. Together they rode on Punnaka's horse until the splendid naga palace came into sight, surrounded by the billowing sea and the strange creatures that inhabit it.

Once inside the court, Vidhura was seated on the central throne, surrounded by the naga king and queen, their daughter Irandati, and Punnaka. From this place of honor, he offered his listeners his wisdom and his heart. He no longer cared for his life, for he had already given of his teachings. But the naga king, having discovered that the heart of a sage is his wisdom, no longer desired the flesh of Vidhura's heart. The naga queen, whose misunderstood words had led to this grave situation, dared not utter a word. All questions resolved, the king gave his daughter to the yakkha in marriage and ordered him to return the sage to the court of his king. Once more Punnaka called for his magic steed and, carrying Vidhura in front and his bride behind, rode off into the sky toward Indapatta, the sage's home.