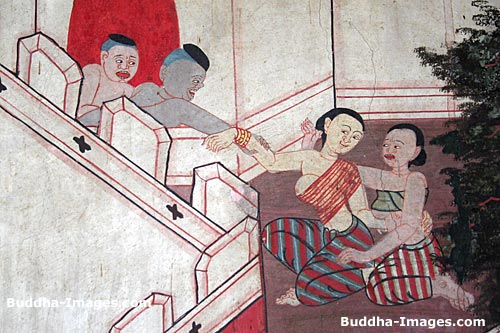 Scene in the courtyard of the palace of King Andati - the Narada Jataka.

In the Kingdom of Videha, there lived King Angati and his beautiful daughter, Ruja. Ruja was his greatest joy, for though he had sixteen thousand wives, she was his only child. Upon her he lavished his wealth, sending her baskets of flowers, delicate trinkets, and garments of spun gold and silver. He even entrusted to her the honor of distributing every two weeks a thousand pieces of gold to the poor and sickly. This almsgiving won him the love of his people and the admiration of his daughter.
On the eve of the great festival of the full moon, King Angati, freshly bathed and dressed, stood with his three chief advisers surveying from his terrace the white city beneath him. As the streets gleamed with the rays of the advancing moon, the king turned to his counselors and asked, "How best shall we amuse ourselves on this festival eve?"

The first one, General Alata, suggested conquering new lands. The second, who was in charge of the king's diversions, thought only of feasting and dancing. The third, the chief court Brahmin, knew of a naked ascetic living in the forest just outside the city and felt that it would be most entertaining to go seek out his advice. Since King Angati had always enjoyed listening to ascetics, he agreed to the Brahmin's suggestion.
Thus the royal chariot, made of solid ivory, was polished and covered with silver ornaments for the king's nocturnal journey. White were the four swift horses that drew it, white was the seven-tiered umbrella, white the royal fan. From a distance, the king in his shining chariot could have been a shaft of moonlight. 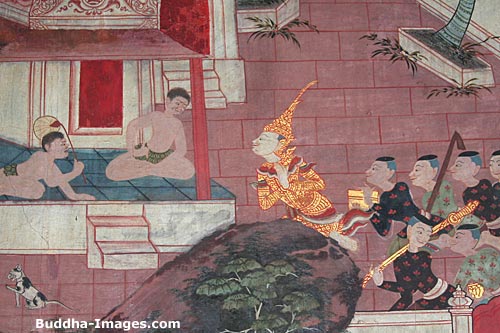 Scene from the Narada Jataka. (most likely) King Andata asking the advice of the heretic ascetic Guna.

As he and his entourage approached the center of the forest, they saw a crowd surrounding a naked man seated on the ground and knew this must be Guna the ascetic. Not wanting to disturb the gathering, the king alighted from the chariot and greeted Guna on foot. After exchanging respectful words with him, King Angati seated himself at one side on a small mat covered with squirrel skins and told Guna the purpose of his visit. "The festival of the full moon is upon us," he said, "and we have come to ask you to remove some doubts from our minds."

He then proceeded to ask him the rules of right behavior toward parents and teachers, wives and children, Brahmins and the aged, the army and his people, adding, "And most important, we should like to know how it is that some men go to hell while others find their way to heaven."

Now, it happened that at that time and in that land there was no true sage to whom men could turn for advice, and by default Guna, though merely an ignorant ascetic, childish and given to half-truths, had gained a reputation for wisdom. Thus when Guna seized this occasion to recite his heretical theories, many people believed him. He spoke in this way: "There is no right or wrong way to behave. Whatever you do, whether it be virtuous or evil, has no effect on your future, for your life is arranged in advance of your birth. Whether a man thrusts his sword into his enemy's heart or whether he gives alms is irrelevant to a life over which we have no control. Hell? Heaven? Nonsense ! There is no other world than this. So follow your own will and seek your own pleasure."

After Guna had finished his shocking speech, General Alata was the first to speak. "That confirms what I have always felt, for in a former birth I was a hunter, killing sacred cows and committing many wrongs. And yet do you see me suffer in this life? I am a prosperous general and have never been sent to hell."

Then a slave dressed in rags tearfully related how he had always been and still was a virtuous man, never failing to give alms in previous lives. "But look upon me now," he said, "a prostitute's son, with hardly enough to eat, and still I give half of my food away to those as hungry as I, and still I keep the fast days. But my past and present virtues go unheeded, alas!"

King Angati, swayed by the stories he heard, spoke of his own unfailing devotion to almsgiving, but still he was not satisfied, saying, "Though I have not suffered as a result of my good deeds, I have not had a bit of enjoyment from them either." And convinced of the truth of Guna's words, he abruptly turned from the ascetic and, without saluting him, departed.

From then on, he resolved to make no further effort to do good. He relinquished all cares and unpleasant kingly duties to his advisers. He no longer made decisions. He busied himself only with watching others at work and at play. Since nothing he did was to have any consequences, he reasoned, he would have no more to do with the business of life. Worst of all, he stopped giving alms.

A month passed, and his subjects lamented the loss of their king's interest in them. Ruja wept for her father, for she heard the mourning of his unhappy people and saw him harden his heart and close his ears to reason.

On the next festival of the full moon, Ruja dressed herself in her finest garments, gifts from her father, and entered his court. When he inquired how she was enjoying life, she answered that she lacked only one thing. She explained: "Tomorrow, my father, is the sacred fifteenth day. Please order, if you will, your courtiers to bring me a thousand pieces of gold that I may bestow them at once upon the people, as has been your custom." 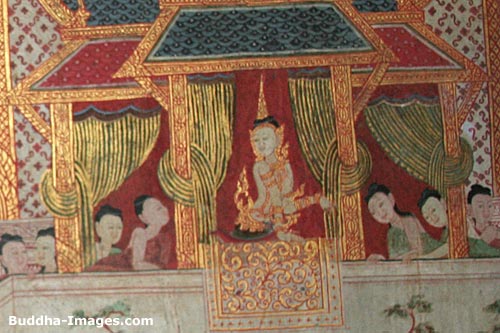 Ruja, the daughter of King Angati, tells the people that she has no alms to give to them.

Her father replied indifferently, "Alms? Give away our gold? I have no wish to carry on such a foolish custom. Destiny makes us what we are. For what reason should I waste my wealth? Please do not annoy me further with such inconsequential matters, my daughter."

Ruja realized with horror that her father had truly strayed from the holy precepts. She pleaded with him thus: "O my father, I have heard that he who listens to fools himself becomes a fool and that he who lets himself be led by children himself becomes a child. I fear that Guna's words have turned you into such a person. As for your prosperous General Alata, he is merely reaping the good from past acts of merit, but it will soon be used up and he will go straight to hell. The beggar who ranted to you of his sufferings must be making up for some grave misdemeanor in his past and will soon come to the end of his misery. The good he is doing now, along with his accumulated merit, will bring him to know the joys of heaven." 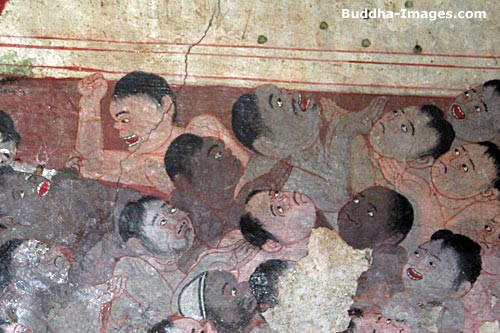 The people listening to Ruja, all poorly dressed and eager to receive alms, show their emotions.

Then Ruja related how she herself, seven births ago, was born as a blacksmith's son who, with his wicked friends, used to corrupt other men's wives. As a result, in succeeding lives Ruja had been born as a castrated goat, a monkey whose father had cruelly removed his son's testicles, a eunuch, and other mutilated beings. Though the king still loved his daughter, he was unmoved by her arguments and refused to budge from his fixed opinions.
Ruja then stepped to one side of the court, knelt down, and with her hands together above her head, made reverences in ten directions to the highest deities, those in the Brahma heavens, begging them to give some sign which would shock her father out of his heresy. 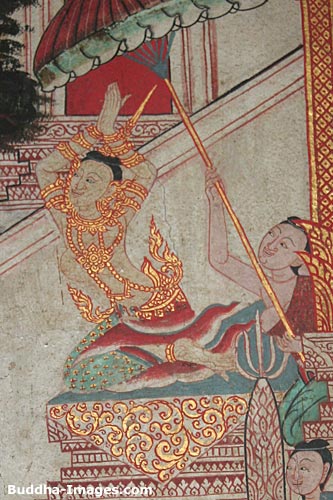 Ruja pleads the Gods for help, and shows reverence to the Bodhisatta Narada (outside of image), who descends from Brahma Heaven.

At that moment the Bodhisatta, whose name was Narada and who was the Great Brahma of that time, was looking earthward from his seat in his heaven. He happened to hear Ruja's supplications and decided to help her. Before taking the journey to earth, he thought to himself, "There is none other than I who can drive away false doctrines. I shall go to the king in some unusual garb so that first my appearance and then my words will arrest his attention. King Angati values ascetics. I will dress like the most striking of them, and when he sees me, he will listen well."

The four-faced Great Brahma dressed according to his word, in a red-mottled garment with a black antelope skin over one shoulder. He carried a golden pole on his shoulders from which two golden begging bowls were suspended by strings of pearls. His hair was matted as is the custom of ascetics, but with a golden needle tucked inside. Thus arrayed, he sped through the sky like the moon when the clouds race past it on a windy night, and stood suspended in the air before the king and his court.

Ruja, who had returned to the king's side, immediately recognized the Brahma and bowed down to pay reverence to him. But the king, alarmed by the heavenly presence, rushed down from his throne to cry, "Who are you? From where do you come?"

Narada answered in this solemn way: "I am the Great Brahma from the Brahma heavens. I have come to tell you, King Angati, that you are condemning yourself to hell."

"I say there is no heaven or hell," Angati boasted. "To prove it, lend me five hundred pieces of gold, and if I am wrong, I will return one thousand pieces to you from hell when I am there."

Narada warned him in this way: "If you were a virtuous man, I would gladly lend you gold, for it is not hard to collect a debt from a man in heaven. But men like you, denying the precepts, following false doctrines, are bound for hell, and when you hear what I will tell you about hell, you will see that no one would dare collect a debt from a man in such a place. There is not just one hell, but a thousand hells. Animals of all sizes will chew on your skin and bite at your bones. Flocks of ravens, crows, and vultures will prey upon you. Dogs with iron teeth will tear at your entrails. Hot winds, razor-edged mountains, burning coals, and sword-leafed trees will torture you."

At last Angati was moved and trembled with fear. He looked to the Bodhisatta for help and asked him humbly how he could uncloud his mind and regain his senses. Narada then told him that while he was king and in good health, he should assume the responsibilities of his realm, providing for the poor, the hungry, the aged, and the Brahmins. "Let your mind guide your body, making you a sure but self-restrained man," he said. "Only then will you find the path to heaven. Let your daughter teach you, for she has learned the right way."

King Angati begged forgiveness and, with his daughter, bowed in reverence and gratitude to the Bodhisatta, who then turned and sped back to the Brahma world.

Mahanarada Kassapa Jataka
Mahanarada Kassapa Jataka is the story of a King who indulges himself in worldly pleasures. With the help of his morally conscious daughter (right on the painting) and the Boddhisatta Narada, the King is saved by his repentance. It depicts the virtue of Love and Kindliness, in having the power to convince people towards the Right Way of living.
Wat Kongkaram, Ratchaburi.