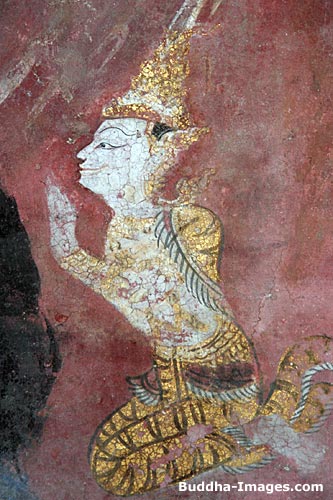 Two villages were situated on opposite banks of a river dividing the Kingdom of Benares. Their hunter chiefs, friends throughout the years, betrothed their infant children to each other shortly after their birth. Now, these two were not like other children. Both were born with skins of golden hue. And although they were surrounded by hunters, they refused to harm any living creature. They had a special destiny, for they had to replace with purity and goodness an evil carried with them from a former life. At that time, many lives ago, they had been born into the family of a doctor who, angered by a rich patient's refusal to pay his fee for curing the eye disease, gave him some medicine which took away the sight of one eye. Though the evil was done by the head of the household, the children of the family also had to do penance. Thus it was that, once they were born into families of hunters and betrothed, they felt obliged to live as ascetics and deny themselves all pleasures of the senses. In vain each begged his parents to forgo the marriage. They were married against their will, but secretly determined to live as brother and sister.

Dukulaka, as the boy was called, and Parika, the girl, unwilling to hunt or partake of the comforts of their parents' dwelling, were allowed to go into the forest and live in an hermitage where they led lives of meditation and purity. Although Sakka helped them with their small needs, he was uneasy, for he knew that their past had not yet been washed clean. Sakka foresaw that a grave misfortune was to strike them. He tried to convince them that they would have to bear a son in order to be assured of someone to care for them when affliction struck. "Never," they said. "Impossible." For this was not the way of asceticism. At last Sakka persuaded them that a pure conception could take place if, at the proper time, Dukulaka placed one finger on his wife's navel.

So it was that the Bodhisatta was reborn into the world of men. But it was not quite a human world. As the ascetics came and went, looking for berries and nuts in the forest, it was a graceful kinnaris who looked after Suvannasama, or Sama, as the Bodhisatta was named at birth. This holy life could only have taken place in the Himavat forest, below the peaks that reach into the very palaces of the gods in Sakka's heaven. And yet, its inhabitants were not immune to danger. When Sama was sixteen, as predicted, a misfortune befell his parents. As they were making their way home after a day of gathering fruits, it suddenly began to rain. Taking shelter at the roots of a tree, they unwittingly stood on an anthill under which a poisonous snake resided. As they huddled there, drops of their sweat fell onto the snake and he was angered. So he puffed out his deadly breath at them and blinded them instantly.

From this time onward their son, whom they grew to cherish even more than before, was their sole support. Sama tied ropes and bamboo poles in all directions for them to follow. He swept their dwelling clean of leaves and insects, collected their food, fed them succulent fruits, went every day to a pond to fill a waterpot for them. He bathed them and comforted them. He moved about so gently that even the deer, timid of other men, were never afraid of him and accompanied him wherever he went. 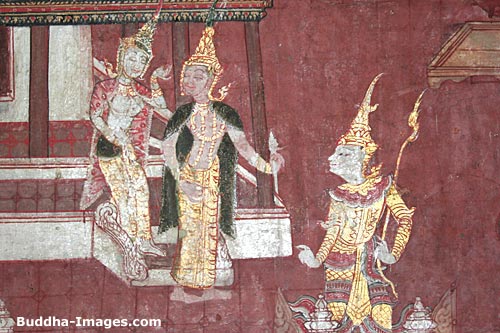 The Sama Jataka -
King Piliyakka takes leave from his companions to go hunting in the forest.

One evening, while Sama was fetching the evening's water in his small round pot, which one of the deer that accompanied him used to carry for him, the king of Benares himself wandered into the forest. While hunting for venison, he had chanced upon a glade near the pond where Sama stood. The king, named Piliyakka, was fascinated by the sight of what appeared to be some divine creature for his ability to tame the animals of the forest. He was consumed with curiosity and the desire to take a trophy home to show his ministers. Envisioning the reception he would enjoy once he returned home with such a prize, Piliyakka in his pride drew back his bow and shot a poisoned arrow into Sama's side. The deer fled in terror. The waterpot tumbled over. And Sama slowly and gravely sank to the sand. Blood poured from his lips as he spoke aloud, asking who it could be who desired his death and what could be gained by such an act. 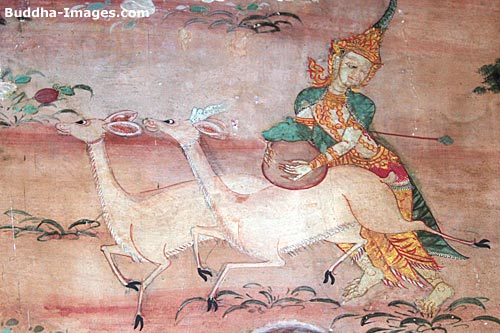 The Sama Jataka -
Sama is shot by an arrow in his side by King Piliyakka.

King Piliyakka was struck by the absence of blame or anger in Sama's words and ventured out of concealment. As they talked, the king pretended that he had been aiming at one of the deer rather than at Sama. But Sama knew this to be a lie, and Piliyakka had to admit the truth. Still the boy did not reprimand him. Instead, he grieved aloud for his parents. Who would feed them now? Who would bring them water each day? Who would bathe them? The king was struck with shame. Whereupon he took up the waterpot and promised Sama to care for his parents as if they were his own. Sama then lost consciousness. Piliyakka, thinking he was dead, wailed loudly and paid homage to Sama's body.

In the meantime, a daughter of the gods who had been Sama's mother in his seventh incarnation before this one sensed that something had befallen her former son. Convinced that Sama as well as his parents would die if she did not intercede, she proceeded to the scene and, hidden in a tree, spoke to the king, who had already begun to change his mind about caring for Sama's parents. "O king," she admonished him. "You have done a grievous thing. Go and nurse the blind parents and your bad deed shall be forgotten. Be charitable of heart and you will attain heaven."

Inspired by the goddess's words, Piliyakka set out for the hermitage. There he confessed his crime to Sama's parents. They were stricken with sorrow and grief. So great was their suffering that their penance, carried with them throughout so many lifetimes, was at that moment ended. Unaware of their renewed purity, they asked merely that the king lead them to their son's body. The king reluctantly complied.

King Piliyakka informs the parents of Sama of their son's death. Notice the snake on top (see story)

On reaching their son, the two ascetics knelt down and wept. All past evils having been washed away by their tears, they were able to bring their son back to life. As his mother prayed, Sama's body slowly turned to one side. As his father took up his mother's solemn words, he turned to the other side. The goddess, who had witnessed these acts from her hiding place, then revealed herself and profoundly asserted the virtue of Sama. The air was tense. Even the kinnaris who had cared for Sama as a child gathered quietly to wait for a miracle to happen.

Through the night they remained beside him, all minds bent on restoring life to the boy who seemed more a heavenly being than a human. At last Sama stirred, then rose, fully recovered from his injury. At that very moment, dawn broke over the forest and Sama's mother and father could see with their own eyes Sama's restoration, for their blindness had ended along with their penance. King Piliyakka, who had come as an intruder into this quiet and pure world, left the site, full of wonder and amazement at the miraculous event he had witnessed. He was unaware to the last that even he had served as an agent of good, for without his cruel act, the devoted son Sama could not have ended his parents' affliction.