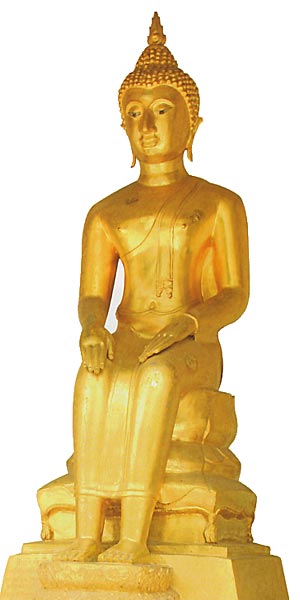 Traveling in a boat
The Buddha sits in the so-called European or Western mode.
In this variant both hands rest on the knees. In another variant the right hand palm is open at chest level.
When the Buddha visited his father for the first time since his enlightenment, he crossed a river to reach his destination.

Displaying miracles for the Sakya family
When entering his father's palace, the Sakya elders did not pay their respect. The Buddha displayed his special powers to them. Among other miracles, he initiated a rainstorm that wet those who did not respect him and left dry those who did respect him.

Holding an alms bowl
The Buddha is standing with both hands around an alms bowl
This symbolizes the first morning after visiting his father at Kapilavastu. In the morning the Buddha went out to receive alms in the city.

The Buddha preaching to his father.