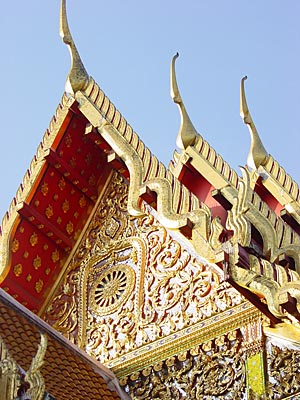 The South gable of the Ubosoth at Wat Benchamabophit displays the Wheel of Law.

Wat Benchamabophit is a temple compound of profound beauty and religious importance. Better known to foreigners as 'the Marble Temple', it is located close to Dusit palace. Wat Benchamabophit is not heavily promoted as a tourist destination, and therefore the number of foreign visitors is relatively small. If you stay in Bangkok for only one day, you could be forgiven for wanting to see the Grand Palace and Wat Pho only, but any longer stay should rightfully include a visit to the Marble Temple. The Ubosoth was constructed with Carrara marble from Italy, therefore the name.

Wat Benchamabophit is a royal monastery belonging to the first class ranking of Rajavaravihara. Few wats belong to this class. The wat was founded during the reign of King Chulalongkorn (Rama V) on 1 March 1900. Because of this date, it not long ago celebrated its centennial. That possibly is one of the reasons why the compound as a whole looks amazingly well maintained, with even the monks living quarters in bright unexpected colors.

The name 'Wat Bechamabophit' simply means : the temple of the Fifth King.

The main structure at Wat Benchamabophit is the Ubosoth Hall. It is one of the finest works of architectural art of the Bangkok period. The Ubosoth has four gables, with the east gable being the main entrance. 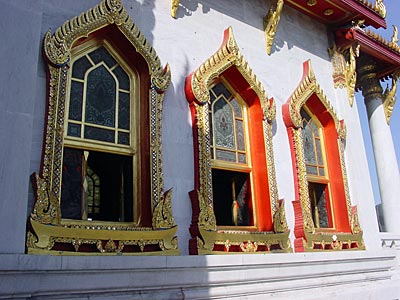 Windows of the Ubosoth at Wat Benchamabophit. 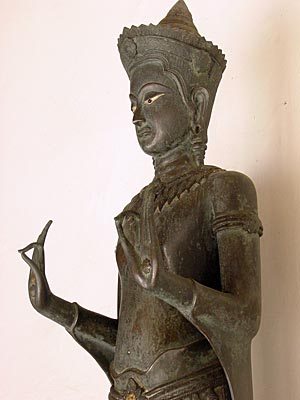 In the gallery of the cloister at the rear of Wat Ubosoth : Buddha image (Lopburi style) with the gesture of teaching.

Inside the Ubosoth, Phra Buddha Chinnarat is the main Buddha image. It is a replica of Phra Buddha Chinnarat at Wat Phra Sri Rattana Mahathat in Phitsanulok province. The image is in bronze (with an unusual blue lighting around it) and with the gesture of the Buddha subduing Mara.
Beneath the Buddha's throne, the ashes of King Chulalongkorn (Rama V) are interred. There are a few pictures of King Chulalongkorn on display in the Ubosoth. 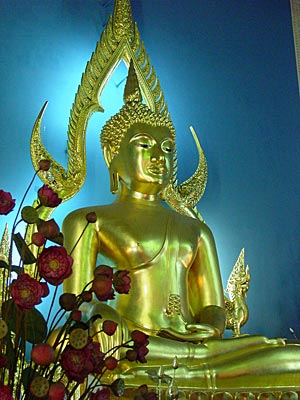 One should walk around the whole Ubosoth structure to admire the intricate and colorful decoration of the windows and especially the gables. From the east, the entrance view with the east gable and its five-tiered roof is simply unmatched.
[Unfortunately, because of the sunlight and the white marble of the walls, it is hardly possible to take well done pictures fron that side during any time of day, except during the early morning hours]

There are many other structures connected through pleasant walkways in the Wat Benchamabophit compound. They include Song Phanuat Hall (residence of the abbot), Song Dharm Hall (used for lying in state of members of the Royal family, and high officials), the Bovornvong Bell Tower. There is a canal crossed by one of three red-colored bridges, with waterside pavillions. One should also not forget to have a short stroll through the colorful monks quarters. 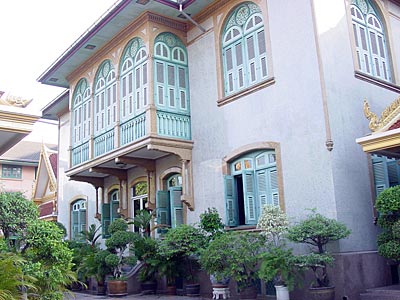 Wat Bechamabophit is an active temple. We were there around closing time, and saw no indication of the temple compound being closed, and therefore assume it stays open to the public longer. However the monks at that time where chanting and praying in the Ubosoth, and that clearly is a sign that tourists should withdraw from that area.

When visiting Wat Bechamabophit, it probably should be most conveniently combined with a visit to Vimanmek Mansion, which is closeby. The whole area contains many government buildings and one passes many ministries just walking around. In our opinion the most speedy way to reach Wat Bechamabophit or Vimanmek Mansion is to take the skytrain (BTS) to Phayathai station, and take a short ride by taxi from there.